Robert Louis Stevenson was no hill runner. Not that such a pursuit would have occurred to the Edinburgh novelist. In Stevenson’s lifetime, running up hills was not a thing, certainly not in the recreational sense. It was not until 1895 – a year after his death – that a man decided to time himself to run from Fort William to the summit of Ben Nevis and back.

But Stevenson was a visionary: he defined a sport that had not even been invented. Kidnapped is set in the aftermath of the Jacobite rising in the 18th century. Believed to be accomplices in the murder of Colin Roy Campbell of Glenure, David Balfour and Alan Breck Stewart ‘set off running along the side of the mountain towards Ballachulish’ to evade capture.

Balfour, narrating, breathlessly recounts the chase: ‘Now we ran among the birches; now stooping behind low humps upon the mountainside; now crawling on all fours among the heather. The pace was deadly; my heart seemed bursting against my ribs; and I had neither time to think nor breath to speak with.’

The chapter concludes with a list of sensations familiar to hill runners: ‘My own sides so ached, my head so swam, my tongue so hung out of my mouth with heat and dryness, that I lay beside him like one dead.’

Stevenson’s words remain the best description of hill running I have encountered.

The northerly hills of the Pentlands that frame the Edinburgh skyline are indelibly linked to Stevenson. Even after poor health drove him to warmer climes, he would reminisce about summertime in the Pentlands. Writing in Samoa, Stevenson noted: ‘The tropics vanish: and meseems that I – from Halkerside, from topmost Allermuir, or steep Caerketton – dreaming – gaze again.’ 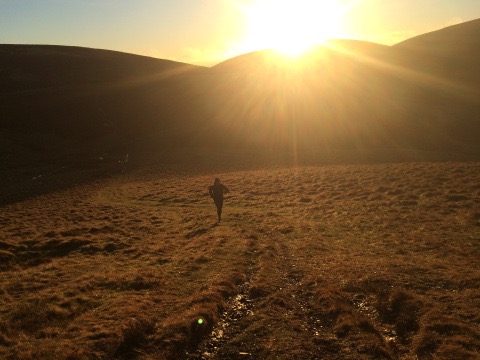 On an autumnal August evening, a pack of 99 runners gathered at Hillend, a stone’s throw from Stevenson’s Swanston cottage, for the Caerketton race. It is a mile to the 478-metre summit – and the runner must ascend some 300 vertical metres to get there. The way is unremittingly steep, ‘on-all-fours’ steep, the gradient touching 50 per cent. Every step is a fight – in mind and body. We reach the plateau and dive into mist, entering a world of shadows. Turning at the cairn, we plummet downhill, first back along the plateau, then down a dreadful precipice of wet vegetation. The first woman is on my left. She falls, a headfirst blunder into heather. She seems to bounce to her feet, continuing her downward hurtle.

By now, the leaders are finished. The protagonists, the Balfour and Breck of this real-life drama, are first-placed James Espie and runner-up Joe Symonds. They are seemingly racing for their lives, too.

Soon it is over for us all. The 99th runner, Ian McManus, still racing aged 74, finishes in 49 minutes, more than half an hour after Espie. The crowd disperses to The Steading pub. It is as if the racing never happened. The memory lives with us, though, for we are bound by a certainty that spans centuries, from Stevenson to McManus. With our hearts ‘bursting’, we stood on the summit of ‘steep Caerketton’ and, just for a few moments, dreamed.