We were sent on our way, a ripple of applause and the pounding of 200 pairs of feet on road drowning out the skirl of pipes. The theatrical idiom ‘break a leg’ was written across a saltire – a light-hearted but all too realistic prospect. A gloomy blanket of mist had been thrown over Jura in the night, hiding the Paps. ‘It will lift,’ we were assured. It did – after the race was over.

Runners were soon stretched out, climbing silently in single-file across boggy ground to the rocky, mist-shrouded summit of Dubh Beinn, check point one. I had been repeatedly warned that navigating between the first three check points was as troublesome as route-finding on the Paps. So, with the clag obscuring our objectives, I stayed close to a group of three other runners, and together we soon gained Glas Bheinn. 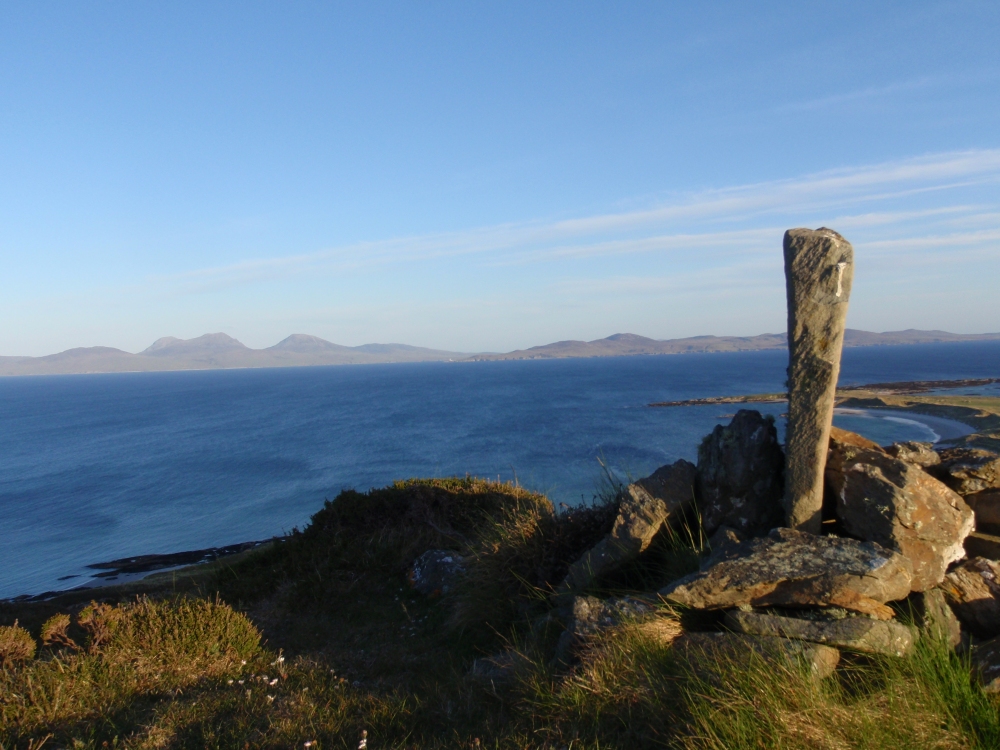 Joyously we swept downhill across a wide ridge towards Aonach-bheinn, the lowest of the seven mountain top check points. No-one else was in sight. It was as if we were racing among ourselves and all the others had disappeared into the darkness, never to be seen again. But as we neared the check point, I glanced behind. There was a group of at least a dozen athletes, bearing down on us like a pack of hungry wolves. And while I absent-mindedly blundered to the west, the followers swooped north – the right way – leaving me flailing in their wake.

We only had to descend a short way before we emerged out of the mist. The descent was ‘moderate’, according to race literature. Much harder and rougher was too come. But this was alarming, terrifyingly steep. I watched runners that were behind me moments earlier plunging downhill, first across heather, then scree, to reach the foot of the glen, seemingly oblivious to the perilous terrain. I froze momentarily, contemplating the descent – and therefore complicating it. Down I went, ankles jarring, feet burning, teeth rattling.

There was to be no respite. The first Pap, Beinn a Chaolais, lay in wait, dark and brooding, its summit lost in the greyness. I began the longest single climb of the race, 600 vertical metres, up a gully, across scree slopes and ramps of vegetation. It was endless, extremely steep. No-one was running. We crouched with hands on thighs, hauling aching bodies to the top, never stopping.

Underlying the pain was something stronger, something deeper. It is always there. It is a grim sense of satisfaction (enjoyment would be the wrong word), allied with the rawness of the terrain and the exhilaration of just being there. We all shared it. That is why we run, why we submit happily and willingly to the ordeal.

I descended with one of the leading women, another Jura novice, who I watched as she appeared to surf down vast shutes of scree. She fell, I fell, and she fell again. Falling is certain. Adrenaline numbs the pain. Rocks ricocheted off my ankles, making me wince in pain. As we began the ascent of Beinn an Oir, she told me to go on ahead if she was too slow for me. I tried, but the woman’s sure stride took her away from me.

The summit ridge was a fearful place: bleak, misty and wind-blasted, with sharp, unknown drops looming right and left. Once on the ridge, I glimpsed two runners ahead. I must catch them, I told myself. The need to reach them became incalculable. I did not want to descend alone. One started walking, the other copied, meaning I was able to reel them in slowly. We came together and descended as a trio. I was lazy. I let them do the vital map and compass work, choosing to trust the judgement of these strangers. I had a paper map only; the wet would have ripped it to shreds. I imagined we were attached with a length of elastic and I could not let that band stretch too far, else it would snap. My fear of being alone was now greater than my fear of these hideous descents.

The ascent to Beinn Shiantaidh, the last Pap, is a blur. I cannot recall the terrain; I cannot recall who I ran with. All I remember is working myself into an unnecessary frenzy about the descent to come. ‘Descent of north side is very dangerous – sheer drop a short way below the summit,’ advised the organisers.

A marshal took my number and I descended for 30 seconds. I passed a runner laid out on the ground. Three times I asked him if he was alright. It was only on the last occasion, when I shouted at him, that he replied he ‘just needed to eat something’. I left him to it, treading carefully downhill. Suddenly I was alone, for the first time in more than three hours of running.

I pulled the map out of my bag. I was right – the wetness soaked the paper, obliterating the contours between Beinn Shiantaidh and C0rra Bheinn. I fought to control a rising sense of panic. I traversed the hill for what seemed like two or three minutes, but was probably less than 20 seconds, before about 10 runners appeared from above. I joined them as they galloped across an indistinct route over large boulders that would have looked at home on a building site, eventually joining a narrow path as we lost height. They were a focussed bunch. One wore nothing but a vest on his top half, while their maps remained folded in bags.

I looked at my watch – three hours and seven minutes, the record finishing time clocked by Mark Rigby in the 1994 race. I was still six miles, two check points and one hilltop away from the end.

One-by-one the group passed me. Not that I minded. Were it a road race, I would have cursed every rival, as a way of deflecting my personal frustrations on to them. Why am I not faster, fitter, stronger? I would torment myself. Not on Jura. I silently applauded each runner. They were heroes, brave, determined, stubborn heroes. 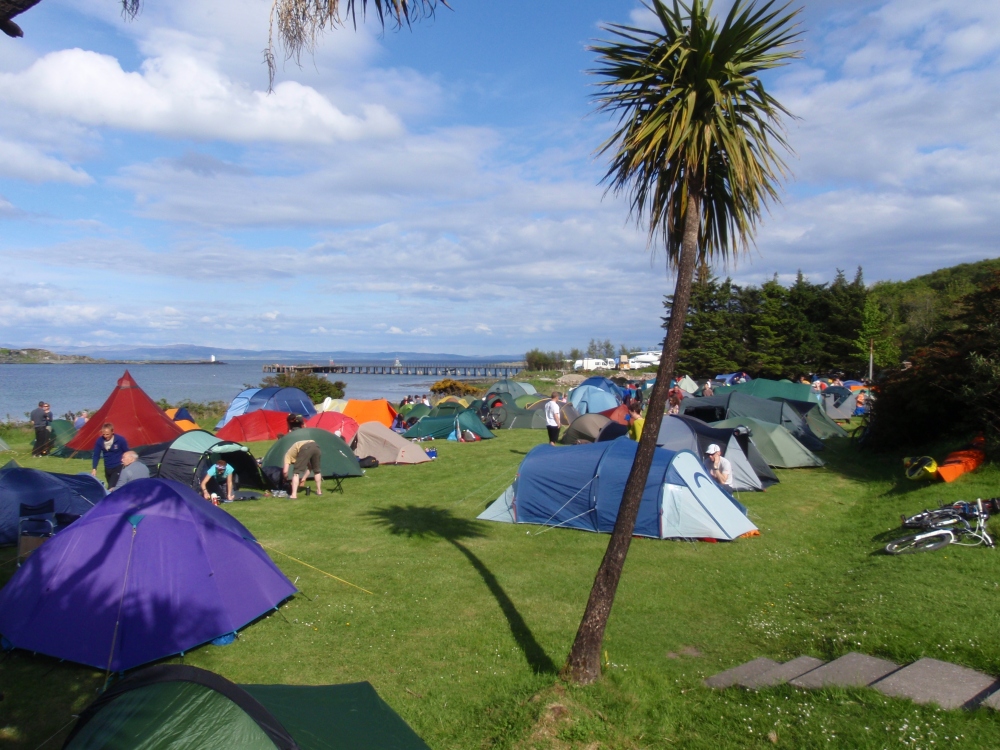 The final hill, Corra Bheinn, sometimes generously referred to as Jura’s fourth Pap, loomed ahead. I struggled up, at times on all fours, praying for the top. I had heard horror stories about runners who had been disqualified because they had failed to find the summit check point in poor weather. I dreaded that prospect. Imagine coming all this way and failing. But I had no such difficulties.

I set off downhill, knowing that I no longer had to go up, forgetting that going down can often be as hard. The run to the road was as endless as the ascent of Beinn a Chaolais. Energy levels plummeted, morale waned and ankles throbbed. My face was scorched, as if I had spent a day in the sun, not mist. Scree that had rolled into my right shoe on the descent from Beinn Chaolais dug into my foot. The little stones would trickle under my toes, hide beneath the arch or dig into the sole. Sometimes it was agony; sometimes I forget they were there, as they rolled to a place that caused less hurt. For the hundredth time, I told myself to take off the shoe and remove the offending rocks. But that would mean stopping, and I doubted my cold and shaky hands would be able to unravel a double knot.

The ground became increasingly boggy as I neared the Corran River and occasionally a leg would plunge calf-deep into a stinking pit, forcing me to use all my remaining energy to haul the limb free. Ahead a little crowd had gathered on Three Arch Bridge, the final check point. I passed beneath one of the arches and climbed away from the river to meet the road. To feel a flat, firm and stable surface below my feet was heavenly.

The race was effectively over, just three miles to go and mercifully no more hills. I soon passed two runners and had a lonely run in as no-one else appeared ahead and no-one was to catch me. It was calm and peaceful at sea level, midges fussed about me. The pier at Craighouse appeared, then the chimney of the distillery. I was very nearly home. I looked at my watch repeatedly. Finding a final burst of enthusiasm, I sprinted over a humped back bridge, passed the ‘break a leg’ saltire and crossed the finish line, culminating my Jura race in a shade under four-and-a-half hours. I stopped. Nothing could feel better than stopping.

I was 58th, more than an hour behind the winner, Bingley runner Rob Jebb. For another three hours, runners poured over the finish line, hailing from the hill-running cliques of the UK: from Ambleside and Carnethy to Dark Peak and Mourne. 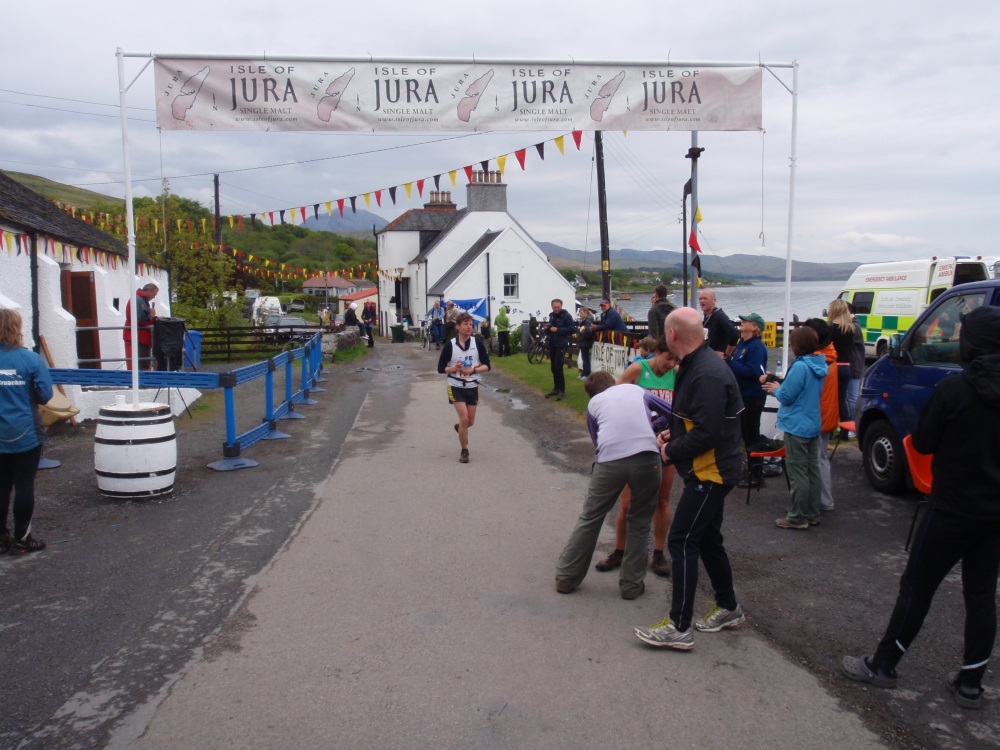 Numerous awards were given out: To the top-10; the leading men and women in their age categories, right up to the over-50s, known as super-veterans; the highest place Jurachs and Eilachs; and to two runners who had completed 21 races.

And then the drinking started. Weary runners needed rehydrating in the form of beer and whisky. The Jura Hotel was brimful, spirits high. The alcohol flowed. Anyone arriving at Craighouse that night would have laughed at the notion we were fit and disciplined fell runners. The party eventually moved to the village hall for a ceilidh, with music and shrieks from the pier continuing until well into the small hours of the morning.

It was about 3am when I wobbled to my tent, singing quietly to myself. I was drunk and could not sleep. My head was ringing. After an hour, I gave up and packed up. I walked the eight miles to Feolin very slowly, watching dawn break over Islay and Jura, arriving there at 7am.

After catching a bus across Islay to the port at Port Ellen, the ferry was approaching Kennacraig when a big man with a big smile sat opposite me. He was George Broderick, a Germany-based university professor who devised the Jura course in 1971 and organised the first race in 1973, when 30 runners took part.

What elevates Jura above other hill events, I asked. ‘The unusualness of it,’ he answered immediately. ‘It is a fell race in the true sense of the term. There are no paths. Runners are left to their own devices. When you are on the mountains, you’re a long way from civilisation. You have to have navigation skills required for fell running, which is orienteering and mountaineering in an athletics environment.’

‘How hard is it?’ he said, laughing. ‘It’s hard, very hard. It’s one of the toughest races in the country, if not the toughest.’

The writer Will Self upset one or two Jura athletes some years ago, describing the runners as ‘goaties’, arguing – in jest, obviously? – that one would have to be more ungulate than human to contemplate such an undertaking. On race day, he said the ‘feral and slightly faecal stench of them is most off-putting’. I found it amusing; others not so. It shows that despite the brilliance of some athletes and the hardiness of all, fell/hill running still has a freak-ish reputation to many. But then isn’t that the very reason we do it?