Some years ago I was running in the Eastern Fells of the Lake District. As I descended a mountain called High Street, I passed a walker. He shook his head. ‘I don’t know how you do it,’ he shouted incredulously into the breeze. I smiled. Encumbered by boots and bag, I wondered the same: How do you do it?

I know what you might be thinking: you are with the walker on this one. Running is hard enough. Why increase the struggle by adding hills and mountains? The prospect is absurd. Nonetheless, hear me out.

I was a walker once. When I first started going to high places,it was to walk, never to run. Had I seen a mountain runner, I would have been as incredulous as the Lake District walker when faced by me. Despite being a runner since school and a marathoner at 18, I did not link the concept of running and mountains until my late twenties. Fortunately, it was not too late. My epiphany came when I was still living in England. Standing on the lower slopes of Herefordshire Beacon, I looked up to see a runner on the ridge silhouetted against a darkening sky. It was beautiful. I desperately wanted to swap places with the silhouette. 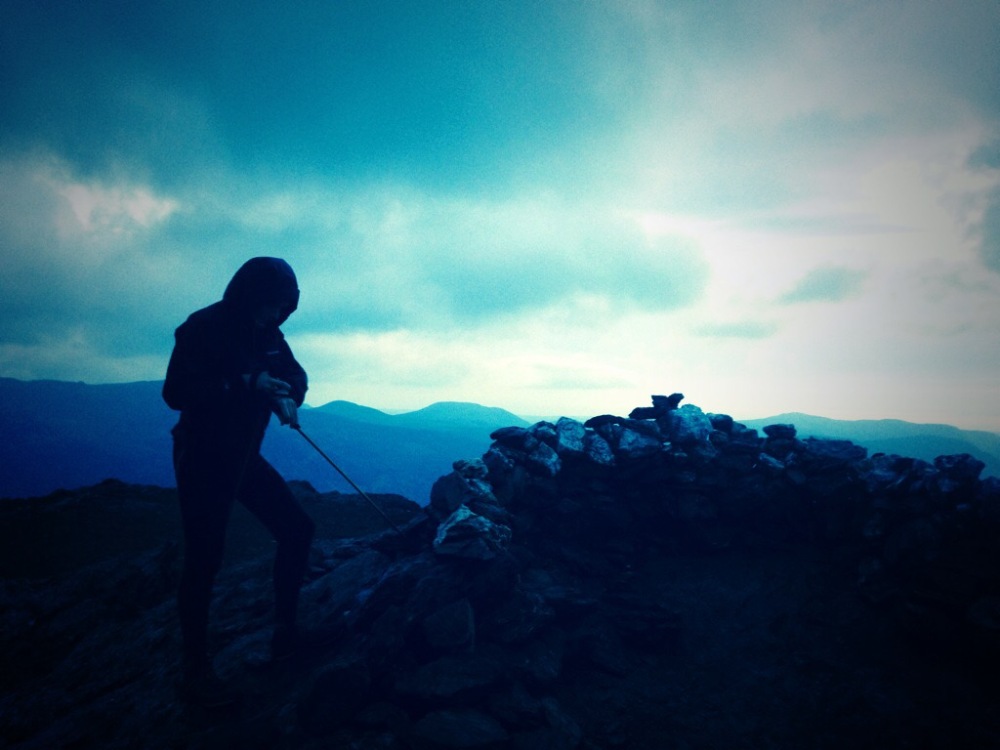 Romance became reality in my first hill competition: the 10-mile Snowdon International Race. I ran uphill for as long as I could, for longer than I thought I could. The adrenaline rush upon summiting was Amazon-like in its surge, far greater than anything mere walking (or road running) could conceive. Then the ability to go from top to bottom in half an hour was a revelation. Running in the hills, I realised, simply involved a switch in mentality – one I was capable of. 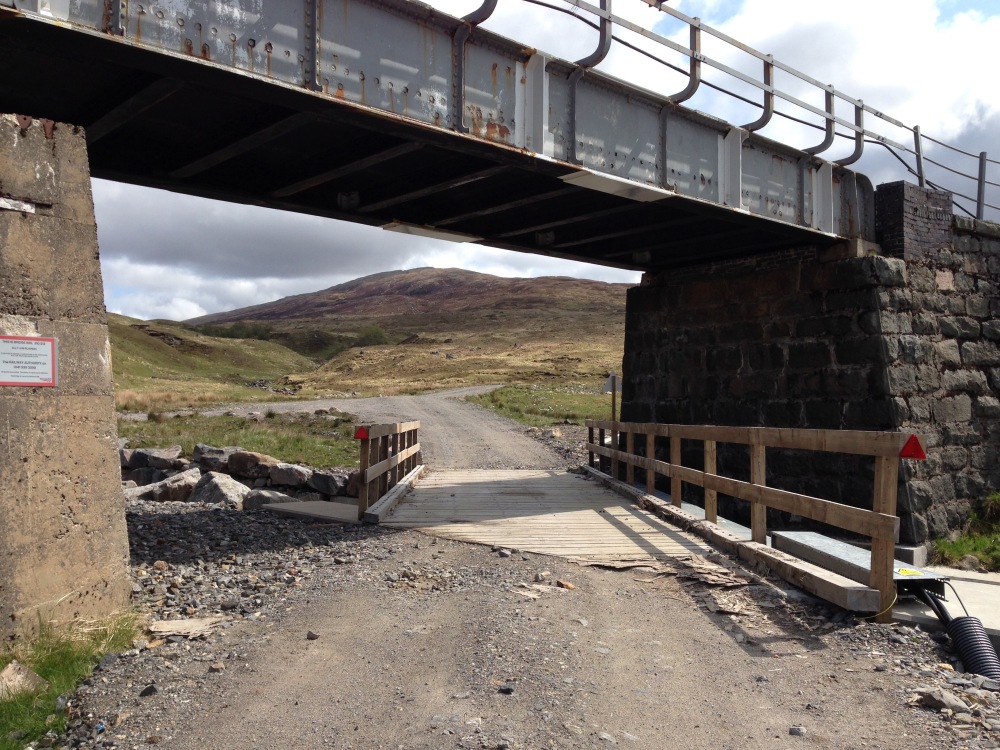 The joy of running is found in its simplicity; take running to the mountains and that joy multiplies. When hill runners look at maps, the possibilities become endless. It is the perfect mode of transport through Britain’s mountains: fast enough to cover significant tracts of land, yet slow enough to glimpse everything on the way. And while the road runner is ruled by the constraints of concrete, the hill runner is free and unrestrained. They can roam at will, knowing no bounds. 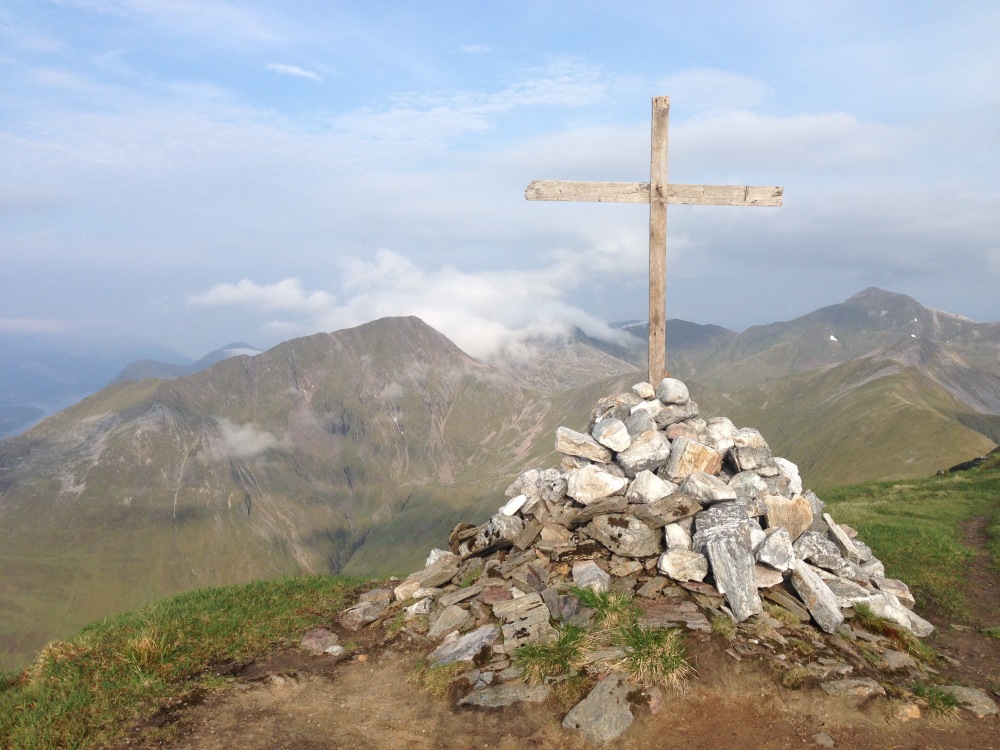 But running is ultimately only part of what hill running entails. This sport is about connecting with nature, about testing your physical and emotional limits, and for marvelling at the giddy notion that a few minutes ago you were down there and now you are up here looking down at the world. More than anything, this pursuit is real. In a world where performance-enhancing drugs and sport is tragically entwined, hill running is something you can believe in.

Tradition dictates that the Greenmantle Dash, starting from the Borders village of Broughton, is held annually on the second day of January. I met David Brown, a member of Tinto Hill Runners, after the 2016 race. ‘Best-thing-worst-thing I’ve ever done,’ he announced. It was David’s fourth Greenmantle Dash; he had got progressively slower in each attempt, with 11 minutes separating his debut to today where he had finished 85th in a field of 90. But that was not the point. ‘You have to be mad,’ was the 52-year-old’s retort when I asked him why he ran in the hills, why anyone ran in the hills. ‘The other thing is the camaraderie.’ David was running with a woman called Kirsty, he told me, who overtook him on the steep ascent. He caught her on the road to Broughton, geed her on when she said her hips hurt, and – with a competitive streak overcoming chivalry – snuck in front of her at the finish line. Kirsty did not mind. ‘She gave me a cuddle at the end. What a laugh!’

Standing close by in the village hall was Andrew Douglas, an entirely different breed of athlete. Brought up in Caithness, the Inverclyde AC runner was aiming to compete in the European and World championships of hill running in 2016. He was clutching something that would be of very little help in that respect: a crate of Broughton Ale, presented to him as the race winner.

I asked him the same question I had posed to David. ‘The attraction of hill running is going to different places and having fantastic scenery,’ he said, ‘but in terms of the racing and the guys you race against, there is a community spirit, a camaraderie, that you don’t really get with track running. Track running is quite intense; people are focused and don’t really socialise much with each other. In hill running you feel like you are all in it together. You can race seriously, but afterwards or beforehand you can have good chat and good banter with the other guys. That’s what makes it really enjoyable.’

‘And the view?’ I ventured. During the climb, a flash of light had drawn my gaze from the ground to the sky. A shaft of sunlight was bursting through grey clouds. It was beautiful. But in an instant, my eyes snapped back to mud.

‘In training you can go out for a run and appreciate the scenery and surroundings. It feels like you have left all your normal life behind and you can just be at one with nature.’ 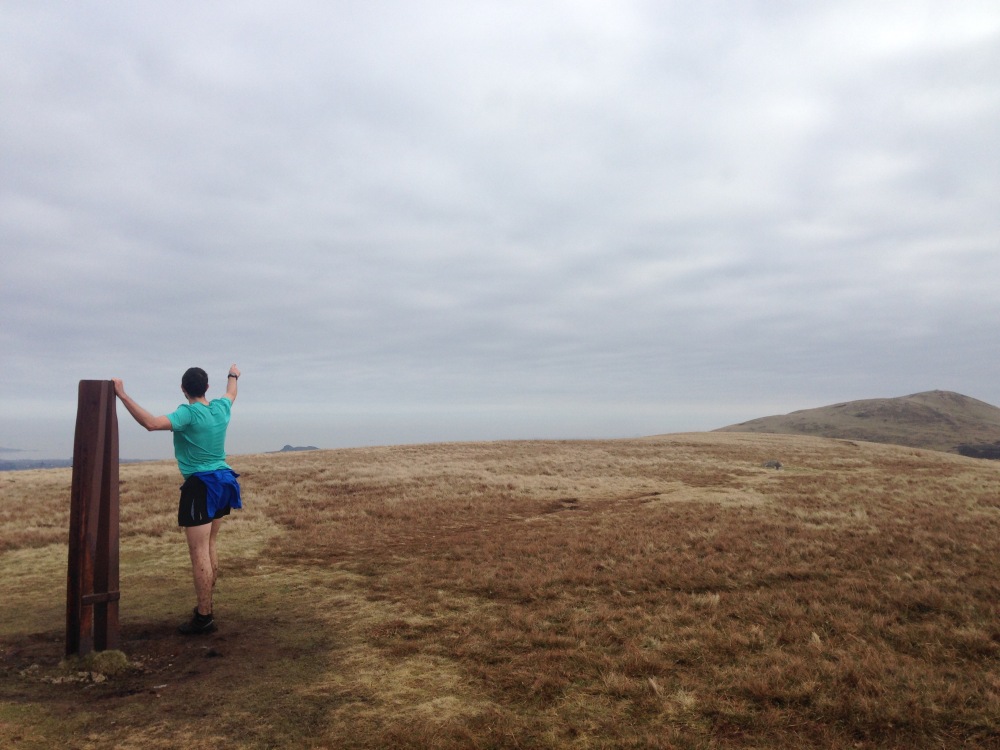 Step one: Find a hill

Edinburgh’s geography is unique. There are hills within running distance of much of the population. To the west is Corstorphine Hill; to the south is Blackford Hill, Braid Hill and the twin peaks of Craiglockhart. Close to the city centre is the inimitable Arthur’s Seat. Further afield, but very close to the Edinburgh bypass and the Edinburgh-Biggar road, are the Pentlands. The hills are closer than you think: the summit of Allermuir in the northern Pentlands is just a mile from the Swanston road end. 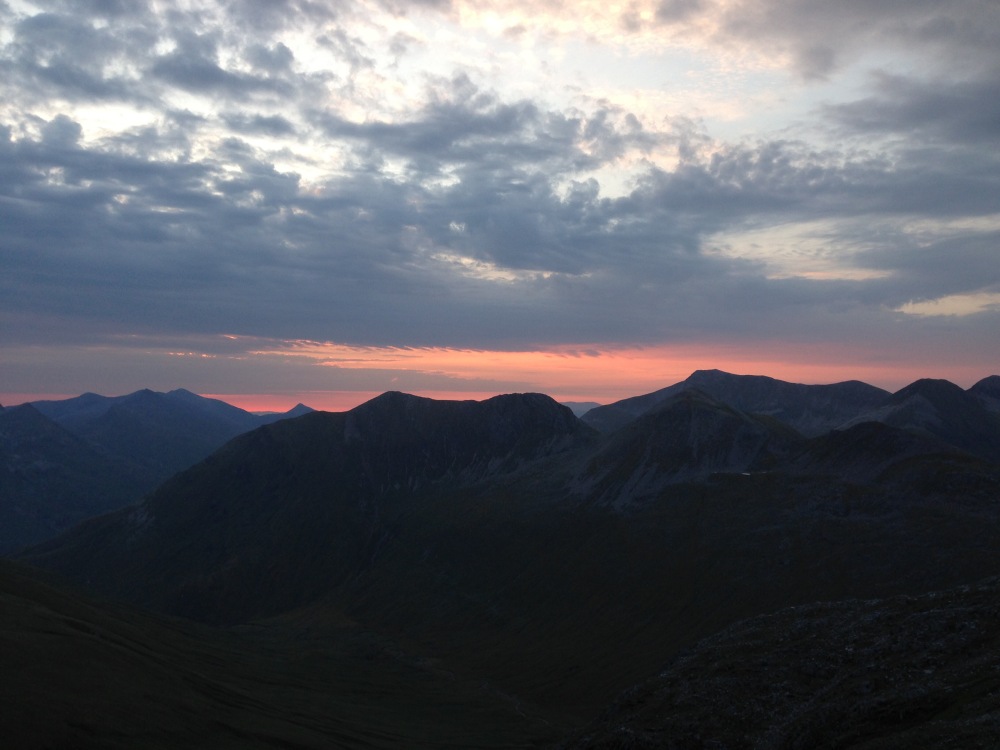 Even the very best hill runners walk up steep slopes. Sometimes it is simply more economical. To maintain the momentum of uphill running is a mental battle. Keep your stride short, look ahead to pick out the best lines of ascent, and try to run slightly within yourself. Hill running is a skill that, like anything else, demands practice. The more time spent experiencing descents and crossing rough, uneven ground the easier it will become.

You do not have to climb very high or for very long to reap the rewards of your efforts. Even at 157 metres above sea level, the view from Easter Craiglockhart Hill, my closest summit, is extraordinary. Edinburgh is laid out before the onlooker. The higher you go, the better it gets. From Allermuir, even Arthur’s Seat looks puny. The view stretches to Bass Rock, along the sweep of the Firth of Forth to the bridges, framed with mountains beyond. 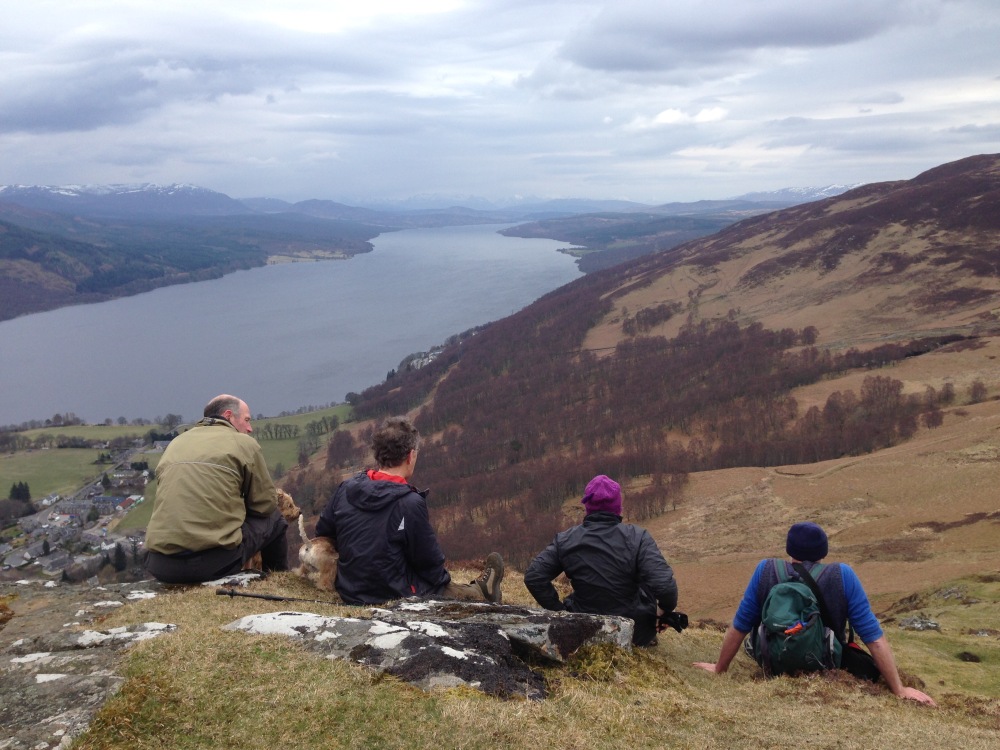 A thriving Edinburgh hill running scene is dominated by two clubs: Carnethy and Hunters Bog Trotters, although other city-based clubs also have hill running cliques. Some of Britain’s best hill runners have donned the vests of Carnethy and HBT, but the clubs ultimately remain inclusive, catering for all abilities and beginners. Visit their respective websites for details about training.

Hill races are legendary for three reasons: their camaraderie, their affordability and their no-nonsense approach. Do not expect a medal or a goodie bag. Do not expect a patronising health and safety lecture. Do expect a table groaning with cakes. Do expect to chat about your shared experience, for – regardless of speed and ability – you all ran up that hill, waded through that bog and got soaked by that cloudburst. Local races still to come this year include the Baddinsgill Round (August 28) and the Pentland Skyline (October 9). See here for a full calendar. 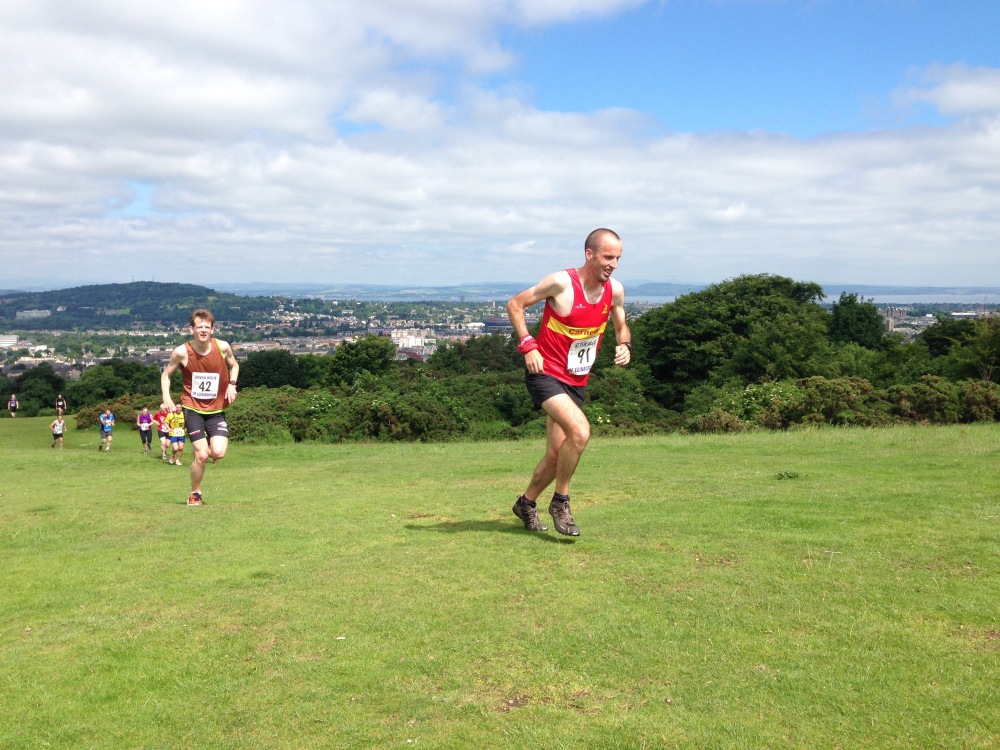 This article was first published in Issue 3 of EH Fitness magazine.