‘The face of Place Fell overlooking Patterdale is unremittingly and uncompromisingly steep,’ wrote Alfred Wainwright in his pictorial guide to the Far Eastern Fells of the Lake District. Wainwright recommends any ascent of the 657-metre peak that rises above Ullswater but this. And that is where I find myself, trudging upwards on pathless mountainside, the bowed remnants of last summer’s bracken crackling under my feet.

I have been running for six-and-a-half hours. Like the bracken, my head is bowed, concentrating on the ground, counting steps: one to 100, then again, then I lose count. I glance behind. Another runner. We began the ascent – some 500 vertical metres on a wall of bracken and heather, over a distance equivalent to three laps around a track – together, but the gap was growing. He seems to wobble in the haze. I wonder if I should wait for him, but racing instinct overwhelms empathy. Negotiating a rim of scree and crag, I reach the summit, dart through a throng of tourists to touch the highest point, and fly downhill. I spring down grassy slopes, dizzy from the heat, feet aching after 35 miles, but certain about this: there was nowhere I would rather be.

Some seven hours earlier, the 95 competitors in the Lakes Mountain 42 – organised by Penrith-based NAV4 Adventure – had been sent on their way. In silence, we tiptoed up and out of Askham and climbed onto the long ridge to High Street. I have seen the worst of the Lakes: high winds, treacherous snow, rain that seems ceaseless. Today we saw the best, climbing into a fairytale dawn: a white carpet of frost, a humbling sunrise, an ethereal Blencathra.

The Lakes Mountain 42 is unashamedly a stepping stone race. Ken Sutor and Adam Stirk, second and fourth-placed men, were preparing for the Dragon’s Back, a five-day stage race across the mountainous interior of Wales; Ally Beaven, who would finish sixth, for the non-stop 233km Andorra Ultra Trail; Karen Nash, the first woman finisher, for the Hardmoors 200-mile ultramarathon. The names ‘Bob’ and ‘Paddy’ hummed in the air at breakfast; the surnames were superfluous in this company. The adage of the ultra-running community, that there is always someone madder, was never more apparent. Indeed, on the sweeping climb of Helvellyn, I would meet a runner who was training for the Transvulcania ultramarathon in La Plama by running hill repeats. He was aiming for six ascents of Helvellyn, a cumulative ascent of almost 4000 metres.

Yet the Lakes Mountain 42 is an extraordinary challenge in its own right, a hybrid of ultra and hill running, on a course arguably harder than the better-known Lakeland 50. ‘Under-hyped and aimed solely at those with good mountain running and hill skills, this is no tame trail race,’ the race blurb reads. ‘You will be going over mountain summits, on an unmarked course, so some navigational skills will be required.’

Perhaps the third-place runner should have heeded the advice. As I followed him up High Street, he ignored the rocky summit, continuing obliviously to the next peak. He was too far away to call back. As I descended to Angle Tarn, the entirety of the Lake District was lit up by brilliant morning sunshine. The path, caressing the edge of steep grassy ramparts, could have been lifted and placed in any mountain region in the world. Once past Patterdale, the field fragmented and I ran on my own through a valley to Grisedale Tarn, before plunging downhill to Dunmail Raise.

Wainwright spoke of the ‘aura of romance’ that characterises Helvellyn, England’s third highest mountain. There is little romance, however, in the slog that is required to ascend from Thirlmere, the less attractive side of Helvellyn. But it is soon over, and the summit plateau offers a glimpse into a heavenly universe. The running is wonderful here. Following the line of the Bob Graham Round, I descended Lower Man, then White Side, from where a line of switchbacks leads rapidly to Patterdale.

Place Fell – an odd juxtaposition of dream and nightmare – passed, and as I run on, now skirting mountains to reach Askham, I have the feeling of being watched. I am. The runner behind has recovered. I catch a glimpse of him approaching and know my escape will be fruitless. He passes easily, clearly recovered from his ‘bonk’, and I have no response. It is enough to simply keep up the momentum of running.

Nothing could spoil this joy, though. I am reminded of two things as I run downhill to Askham: firstly, Wainwright’s words: ‘there is no other place quite like Lakeland’; and secondly, the most wonderful fortune I possess to have discovered the unending pleasure of running in the mountains. 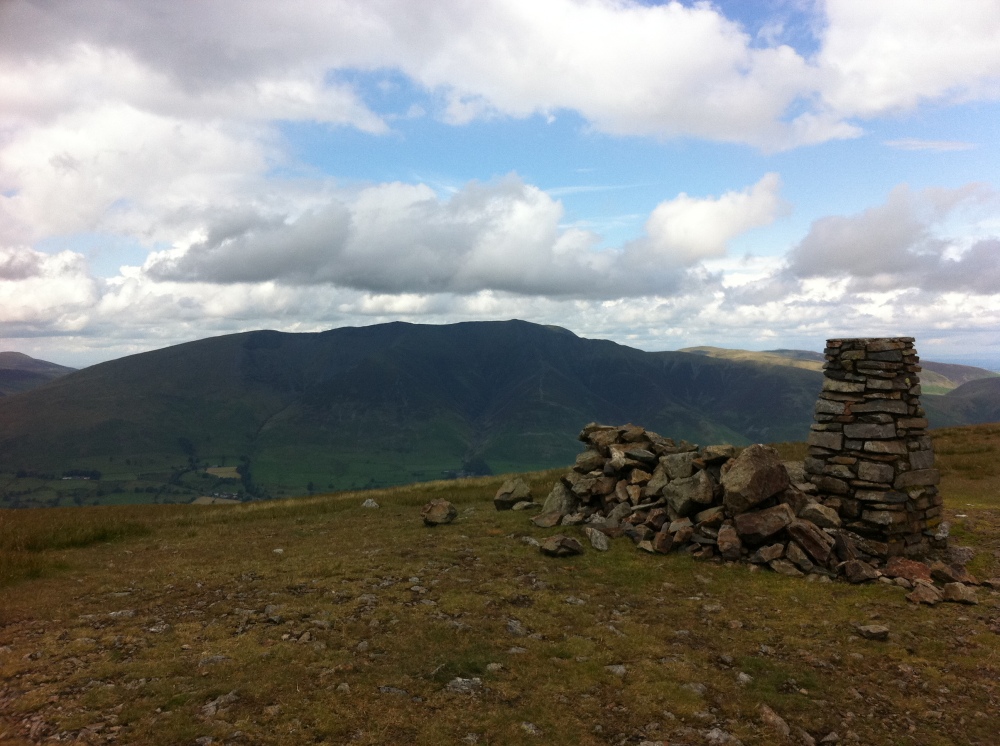 3,000 metres of ascent and descent