Helene’s bafflement is understandable: her mum is running 10,000 metres on a 400-metre track. An unchanging vista. Running in circles again and again and again. The preserve of the running ‘sadist’. Helene’s eyes beseech an explanation from her mum: What are you doing?

Inga will run a 46-minute 10k. She will race the entire event on her own. With heavy rain falling, she will finish third from last. Had she competed in a 10k road race, she would have comfortably finished in the top-third of the women’s field. What is she doing? 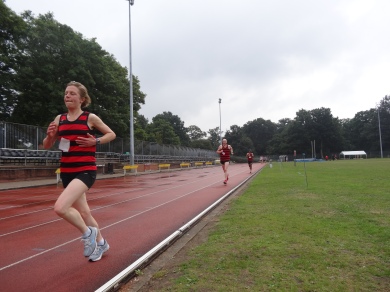 At midday on a wet, humid track at Tooting Bec, 30 runners – a ‘good’ turnout, I am assured – are under starter’s orders. A moment later, they are running a first circle of 25. The winners will be crowned the fastest man and woman among the one-million population of Surrey.

There is no shortage of motivation in south London and Surrey today. Runners are racing at the Thames Meander Marathon; they have gathered at the Bushy Park Half Marathon; hundreds more have been lured from slumber to begin the bank holiday weekend with a 9am parkrun.

Yet only a tiny proportion of the running public – ranging across the a wide ability spectrum – chose to focus their motivation on a track race at Tooting Bec athletics stadium, the home of Herne Hill Harriers. Track races over 10,000m are infrequent affairs, vastly outnumbered by road 10ks. In the run-up to the Tooting Bec meeting the adjective used to describe the race was ‘rare’. An unfortunately rare opportunity to race 10,000m on the track.

The British public’s exposure to 10,000m track races is not rare, however. Only a fortnight earlier, Mo Farah was outsprinting Ibrahim Jeilan in the final straight of the Luzhniki Stadium in Moscow to win the World Championship 10,000m. Millions watched. The public love to copy Farah’s trademark Mobot; they are less enthusiastic about the owner of the Mobot’s distance.

Why will the running public not embrace the 10,000m? Is it because they cannot race the distance because of its rarity? Or is it because they will not? Running round a track 25 times is ‘intimidating,’ Robin Jones, the ninth-place finisher and a member of the host club, concedes after the race. ‘It’s sadistic. Sadistic fun. It’s an event for the running purist.’

Typically, in road 10ks, runners stride confidently from the start line with the next the general public sees of them a glorious, dogged sprint for the finish line. The slowing down at 3k, the cramps at 5k, the nausea at 7k, the gritting of teeth at 8k. These moments are hidden from prying eyes. On the track, private battles become public.

Geoff Jerwood, a coach at Herne Hill Harriers and a former sub-2.20 marathoner, said: ‘You put yourself out there in a 10,000m race. It is different doing a 10k on the road. The scenery changes and it is psychologically easier.’

Stan Allen, another Harriers coach who ran a ’31-and-a-bit’ minutes 10,000m best on a cinder track in the 1950s, sums up the art of running the distance in one word: ‘tradition’. He said: It’s a Harriers’ tradition; I don’t think it’s a runners’ tradition. Harriers are different.’

Now there are hopes that the success of Farah might translate to a resurgence in the ‘tradition’ of the track 10,000m, with 2014 – ironically the year Farah plans to become a marathoner – offering the opportunity of a turning point in the fortunes of the distance.

Highgate Harriers will again host a 10,000m Night of the PBs, first held in June 2013 to encourage top-end athletes. One runner, Ed McGinley, broke 30 minutes, while six others eclipsed the 31-minute barrier. The idea was simple: bring together some of the top runners in Britain, let them race, watch personal bests tumble. It worked. According to Power of 10 statistics, 44 of the 56 athletes in the three races gained a personal best that night. The evidence of the Night of the PBs is that if athletes can race over 10,000 metres, then they will race – and race fast. That opportunity, of course, should not only be the right of the ‘top-end’.

The Night of the PBs was also an attempt to bring excitement to the world of track running. Athletes could choose a song to be played during their race. The requests ranged from Eminem’s Lose Yourself to Elton John’s Rocket Man. Even the name, the Night of the PBs, adds a frisson of mystery and appeal.

Following the Tooting Bec race, Kojo Kyereme, the race winner in 31.34 called on British Athletics to boost the profile of the 10,000m by putting on races to encourage athletes to strive for excellence. ‘In the past there were role models like Dave Bedford and Eamonn Martin running fast 10,000m races on the track. There need to be opportunities for people to run fast,’ he said. 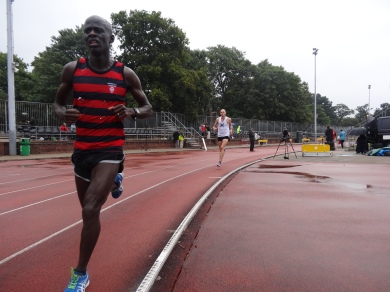 Kyereme’s call has been pre-empted by Kent AC, the reigning Surrey League cross country champions, who have written to British Athletics calling for a 10,000m race to be staged in one of the British Athletics League (BAL) meetings next season.

In a letter to British Athletics, Kent AC coach Ken Pike said: ‘This distance, despite being a championship distance, has all but disappeared off the British calendar with only one open race in Biggleswade each year, plus UKA have been struggling to find a host race for its own 10,000m championship in recent years.

‘Standards have collapsed accordingly, partially because runners can no longer race this distance. I believe that the BAL has a responsibility to provide the missing link between the few county championships that still cater for this distance and the AAA/UKA championships as there is a ‘black hole’ at present.’

Pike added: ‘We simply cannot stand by and do nothing as this championship event falls of the athletics calendar.’

Having splashed through puddles, Sarah Allen, the final finisher at Tooting Bec, crosses the line in a shade over 51 minutes. She receives the biggest ovation of the afternoon from a crowd huddling under what little shelter the stadium offers. Her efforts in a small, unwitting way keep ‘tradition’ alive. Now she has passed a baton to her fellow athletes – and their clubs and governing bodies – to make it blossom again.