You have to be an ultra-runner to appreciate the qualities of the ultra-shuffle. To the non-initiated (and count yourself lucky), to ultra-shuffle is to occupy the hazy middle-ground between running and walking. It occurs when the athlete is fatigued to the extent that fluent, hamstring-extending motion is no longer possible – but, while the will remains, nor is walking. The outcome is shuffling. Not running, not walking, but trundling along at around 5 or 6 mph. Hobbling, trundling, shuffling, call it what you will; what matters is you are moving, and if you are moving you will reach the end. Eventually.

I do not want to call myself an ultra-shuffler. I am a runner and an ultra-runner, but I have no desire to be an ultra-shuffler. That’s why distances beyond 50 miles unnerve me. That’s why I never want to run 100 miles. Beyond the ballpark distance of 50 miles, legs will succumb to fatigue. Stride length shortens and fluency fades; before you know it, you are ultra-shuffling. And once the ultra-shuffle stage has been reached, there is no going back.

I ran the first half of the Vanguard Way; I ultra-shuffled the rest. It was not a race. Think of it as a challenge, an adventure, a self-organised (and cheap) ultra in these times of economic hardship. After getting lost some five or six times, the prepared-for 66 miles became 68. I ran for 10 hours, 47 minutes. That is how long it took me to get from Newhaven train station to East Croydon train station. I had hoped for a time under or at least nearer 10 hours. I went through 26.2 miles in 3 hours, 30 minutes. I went through 50 miles in 7 hours, 20 minutes, but I was inexorably slowing down long before then. I cannot remember the precise moment I became an ultra-shuffler. It was probably around the 36-mile mark as I left Ashdown Forest; the descent hurt more than it should and my gait was uncertain.

Having stopped for five minutes at Forest Row following 39 miles, re-starting was a painful affair. A hobble, a wobble, a limp and a flinch, and I was just about running again. My spirit was low. I had been due to meet two support runners at Forest Row, but their progress to me had been halted by lines of cyclists in the London to Brighton ride. Having run solo for 34 of the 39 miles, I needed moral support and a distraction. More than that, I needed someone to tell me to buck up.

I ultra-shuffled. This was to be my fate. Fun, if this had ever been fun, had evaporated. It did not matter if I was on trail or road, going uphill or down, my legs had a new maximum speed. This hour – the seventh – was my darkest. Fatigue overwhelmed my legs. But, as trite as this sounds, there is something far worse than all this discomfort – and that’s stopping. I could live with short-term discomfort. But stopping? Because I was a bit tired? Never. A measure of salvation was nearby. As I skirted the heights of Dry Hill fort, a familiar face appeared. It was Rob; he had paced me through a successful Bob Graham round, he would get me through this. Soon after, I greeted Duncan, another Bob Graham veteran. As a three, I felt rejuvenated. I was told what to eat and what to drink. I was urged to buck up. To be told that these two people will not leave me, will stay with me to the end, is the runner’s equivalent of a badly-needed hug.

Would I have succumbed to the ultra-shuffle had I met Rob and Duncan at Forest Row? I’ll never know. I’ve no intention of running the Vanguard Way again to find out. I had, perhaps, started too fast and too excited, yet at the time I felt like I was holding myself back, despite what a 3 hour, 30 minute trail marathon suggests. Was the ultra-shuffle – a physical affliction – caused by mental weakness: the disappointment of not meeting my support runners when expected, an obsession over the overall remaining distance rather than breaking the route into manageable chunks, the nag, nag, nag of self-doubt?

The last thing that is needed when ultra-shuffling is more ultra-shuffling. There are few things more demoralising than lost ultra-shuffling. Oh, Limpsfield Chart, how I cursed you. Regaining the Vanguard Way, I resumed pure ultra-shuffling and dragged myself up the North Downs. I was glad to see Titsey Hill; at least I could walk up. The path climbed scenically (and pointlessly) above Woldingham and something remarkably unexpected happened: I started running again. Proper running. Striding. Arms pumping. Joyous running. The epiphany lasted for about two miles before the ultra-shuffle returned.

I wasn’t running the Vanguard Way for a laugh; I do not run very long footpaths that are a devil to follow and – for large stretches – tortuous underfoot for the sake of a Sunday jog. No, this run was part of a series of charity events organised by my school under the umbrella of the ‘Vanguard Challenge’. Students and teachers were walking the entire route, as well as running and walking 12 and 6 mile stretches. As the path greeted the outskirts of Croydon, we met a group of around 30 student walkers. Duncan ran ahead, shouting ‘runners coming’. It was all very dramatic. The walkers stepped back and lined either side of the narrow path. We ran – I mean ran and absolutely no ultra-shuffling – through the group as they cheered and clapped. I felt like a returning hero. I could have cried had the Vanguard Way not already stripped me of emotion.

There would be no other drama. We simply kept moving. Duncan insisted I eat a jelly baby. I could scarcely look at a jelly baby, let alone eat one. Like Jaffa Cakes, they look set to be banished to the sustenance dustbin. We slipped through Lloyd Park, then in and out of a maze of alleys, until I knew I had done it. I knew where I was and I knew East Croydon train station was near. ‘We are very close,’ I said, desperately relieved. I had never been so happy to be so close to East Croydon train station. I crossed the tram lines and ran through the doors of the station. I stopped moving. I stopped my watch.

And that was it: the longest ultra-shuffle of my life. If there is a sense of anti-climax to this blog post, it is only to mirror the anti-climax when finishing an ultra-shuffle. I felt nothing, relieved only to stop running. That is when I know that I have tried very hard – when finishing has little pleasure beyond the pure cessation of movement. The warm glow of achievement comes several days later – even if it is achieved through ultra-shuffling.

A version of this story also appears on The Running Stories website here.

Fresh and willing: Newhaven train station at 6am 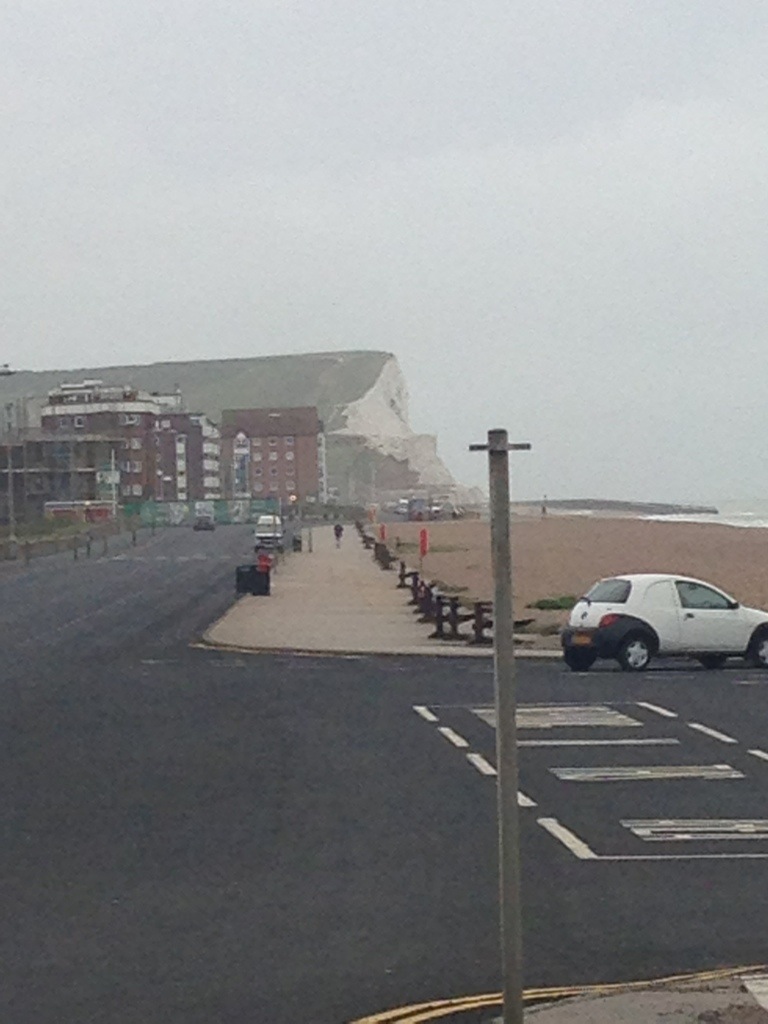 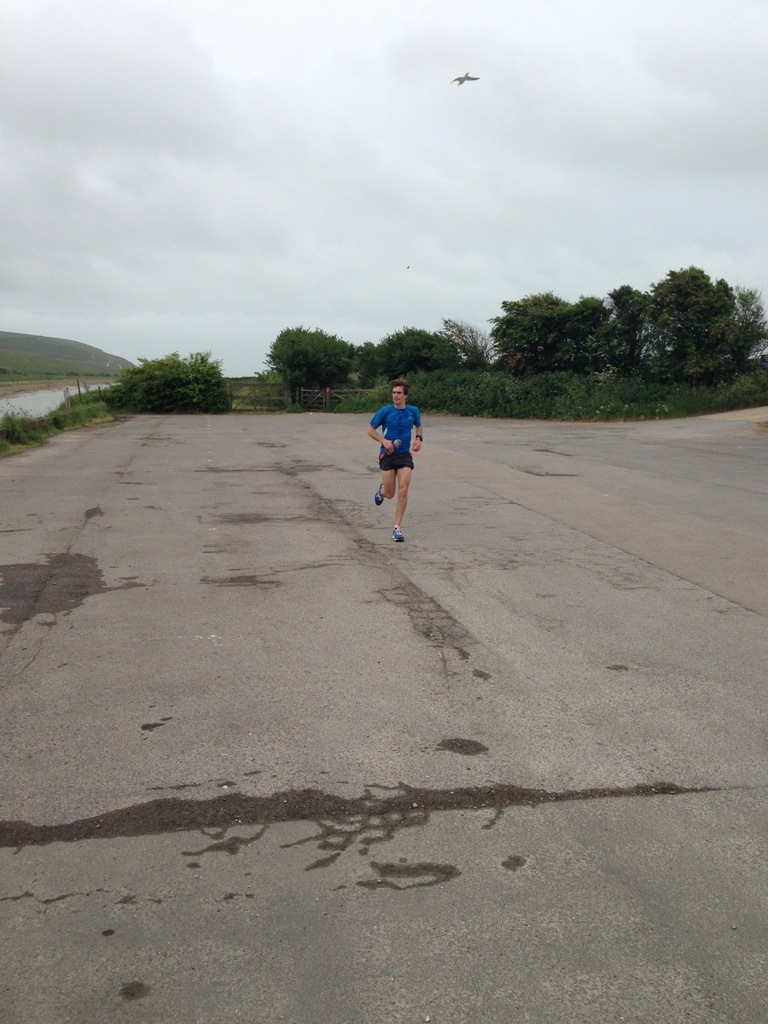 Arriving at Exceat Bridge after 6.5 miles

Hurdling at 60 miles on Nore Hill 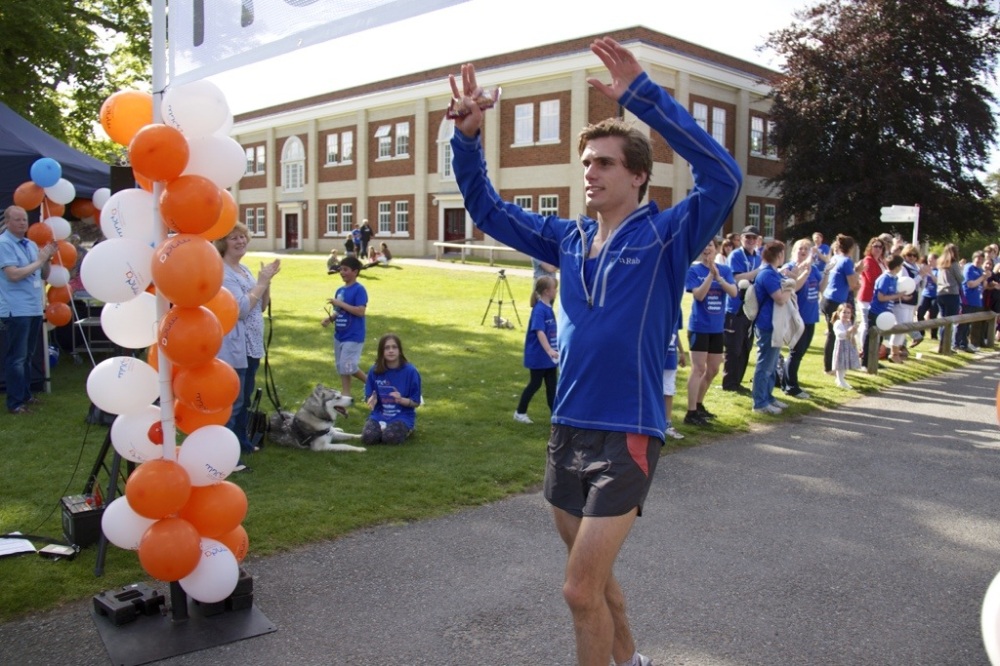