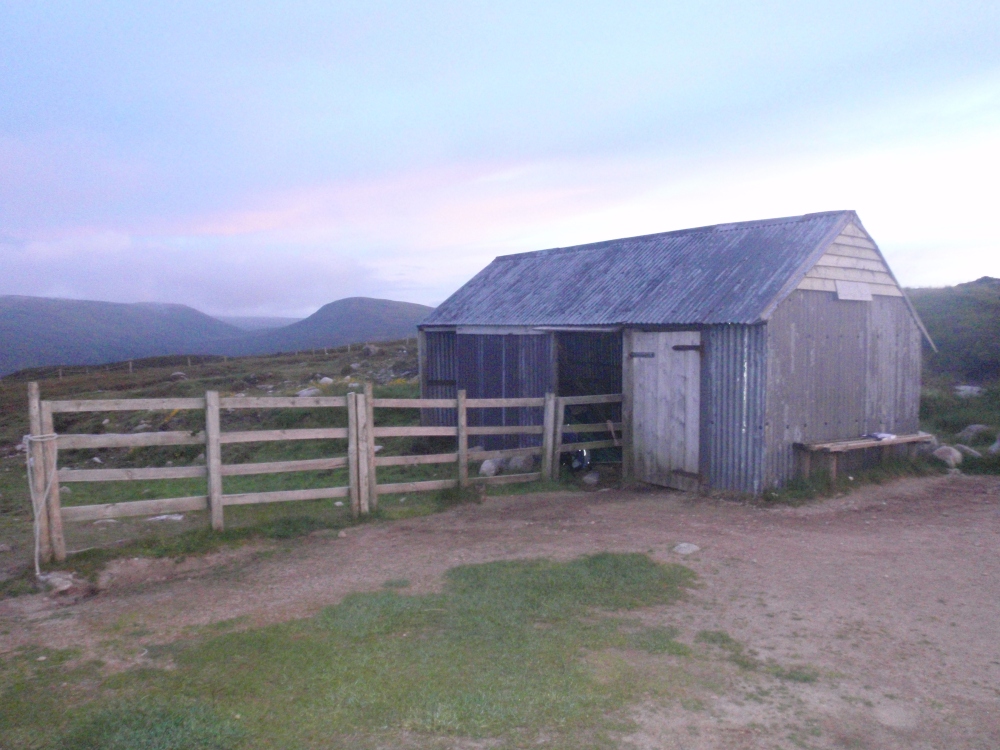 I decided to do the Lochnagar round of five Munros above Loch Muick, breaking up the 20-mile trip with a wild camp. With rain forecast, the hut (above) is where I made camp.

This is what I wrote in my diary that night: “Of all the things I could be doing in life, the places I could be seeing, tonight I’m sleeping in a horse shed on a mountainside in the Cairngorms, the midges swarming about me, praying that Dobbin, who isn’t about at the moment, doesn’t come home and stamp on my sleeping head. What am I doing here?”

According to a map at Spittal of Glenmuick, where I had grudgingly paid £3 to park (meaning the miserable camp wasn’t even free), this building of wood and corrugated iron was marked as Allan’s Hut. It failed to point out that Allan was a horse. Perhaps I shouldn’t grumble so? By morning, I was glad of the shelter as it rained in sporadic bursts overnight.

The location of the camp had other benefits, for I was standing on my first Munro, Broad Cairn, within 20 minutes, and on my second, Cairn Bannoch, by 9am. In truth, these weren’t the most wonderful hills, awesome in scale rather than in form. The wreckage of a plane lies very close to Munro number three, Carn an t-Saigart Mor, from where it was an undulating march over my final pair of hills,  the non-descript Carn a’Choire Bhoideach and the grand Lochnagar.

As I meandered up Meikle Pap, one of Lochnagar’s four tops, to get a better view of the mountain’s corries and cliffs, a swirl of black cloud swept over my head, accompanied by an enormous clap of thunder. Thunder and lightning are great motivators I find. They make you want to descend very, very fast, as thoughts of being fried to a crisp spin through your mind.

I was soaked within moments as fat drops of rain fell from the sky as if Lochnagar was a Brazilian rainforest. Sheets of lightning illuminated the sky above the mist that had wrapped itself around me. I wondered how the 20 or so people I had seen on Lochnagar were coping. The world was wicked for a few minutes and I don’t mind admitting I was scared. In hindsight, it livened up what was an otherwise prosaic day and night.