So, Beachy Head, the second hardest marathon in the UK. Which only makes you wonder what could be harder. The ironically named Picnic Marathon in Surrey, a quick Google search revealed, with that race climbing 6000ft in 26.2 miles compared to Beachy Head’s 3300ft.

Second place it may be, Beachy Head, nevertheless, starts hard, gets harder, then becomes very hard, before becoming extremely hard indeed. This overarching – at time, overbearing – theme of hardness begins immediately, with the course rocketing up a steep grass slope to escape Eastbourne before the South Downs Way turns north and climbs almost continuously to the summit of Willingdon Hill. On the way a spectator told me I looked like ‘Dr Who’. I didn’t think to stop and ask: ‘Which one?’ I could make some wise crack now about teleporting myself to the finish line, but I’ll resist the urge.

Back to running. I was 4th over the top of Willingdon Hill, with seven-times Beachy Head victor Stuart Mills, Steve Nimmo and a Lewes runner not far ahead. The descent to Jevington and the 4.4-mile checkpoint was more technical than I anticipated. A cautious descent and stopping momentarily to drink relegated me to 7th place. I was happiest when climbing, though, and by the time I reached the zenith of the second major rise, Wentover Hill, I was 4th again.

Downhill again. I was overtaken, again. A trio of us ran through Alfriston, chasing down the leading trio ahead. Slowly but surely, I pulled away from the other two as we ascended Borstall Hill, the longest single ascent of the race at around 150 metres. I felt strong; my stride was steady; my breathing shallow. It was a marvellous day to be racing. Blue skies. A fresh if not brisk breeze. Views for miles.

The leaders remained in sight as I plummeted south, into a headwind, as I departed the heights of Borstall. As the route closed in, the front three were hidden. I was alone: runners were no longer visible in front or behind. Now it seems a virtual taboo to criticise the Beachy Head Marathon, such is its standing and reputation in running circles. So, deep breath, here goes: for me – running without the benefit of following-the-man/woman-in-front – the route wasn’t clear. Signs were sparse. For long stretches I ran in hope that I remained on the race route. I resorted to asking walkers if they had seen runners pass this way before me.

Dashing through a narrow lane, I emerged into Littlington; the village was abuzz. I wasn’t lost. The excitement, the shouting, the cries of ‘come on, the leaders are only two minutes ahead’ buoyed me – too much. I surged through the village, running zealously onto an awful ascent on a field of overgrown grass. For the first time, my stride faltered. There was more confusion as I skirted a farmer’s field. ‘Is this the right way?’ I asked a cyclist. It was, mercifully. Then came steps, a steep downhill, more steps, a piper at the brow, then a terrific panorama of Cuckmere Haven. Running towards the sea, I was gaining on 3rd place. It was the Lewes runner, who had gone from 1st to 3rd, and soon to 4th. In sight, just, were Mills and Nimmo, matching each other stride for stride.

I finally usurped the Lewes man on the first of the Seven Sisters. He looked spent. The Sisters were short but steep, so steep that walking can be more effective. I experimented, walking the first two, then running the rest. Walking hurt more than running. I was becoming very tired. I recalled reading Mills’ report from the 2010 race when he described his efforts on the Seven Sisters as ‘hill reps’. For me, these were no hill reps; moreover, survival mode was beginning to creep in.

I was glad to see Birling Gap. Two or three miles to go, I thought. I can hang on, I told myself. No, ‘four miles’, a spectator corrected. My heart sank. I looked at my watch, contemplating the grimness of the next 30 minutes. I was struggling now even on gentle inclines. Inevitable exhaustion. A lack of long runs. A lack of hilly runs. A lack of food. The motivation required to race solo. Wavering concentration. All those things.

I trudged up Beachy Head, wobbling a little. I was not running the way a runner in third place should. Even the spectators massed on Beachy Head looked embarrassed to see me. Cramps in my quads – ever-present since the first of the Seven Sisters – worsened. I didn’t, I couldn’t, appreciate Beachy Head. A field of grass was all I noted. I had no concept of the brilliant whiteness of the chalk, the fearful heights of the cliffs. I simply shuffled, head down, lifting it occasionally to glance at Eastbourne and salvation.

Suddenly it was all downhill. Not as simple as it sounds. Gravity worked its magic, but after 25-and-a-half miles of punishment, my cramping legs knew only one speed. A South African man joined me, trotting alongside for around 400 metres, insisting he do the talking, I do the running. He told me about cycling adventures in the Pyrenees before peeling off at the steepest section of the descent to the finish line – the same stretch of grass I had freshly skipped up three hours earlier. So, I was at the end, 3rd in the Beachy Head Marathon, the UK’s second hardest, in a shade over three hours, 15 minutes. Very tired. Very pleased.

POSTSCRIPT: The results are now up on the ‘unofficial’ Beachy Head Marathon website. Orpington runner Nimmo denied Mills an eighth win, with the one-two separated by 31 seconds. Sunday night and my feet remain very tender.

MONDAY UPDATE: Sore shins, sore feet, sore quads. I feel like I am recovering from a fell race, not a marathon, such is the pain in my quads. A bath hasn’t helped. Stuart Mills has posted his thoughts on the race on his blog here, and there is also an insight from Steve Nimmo in the comments section. I’ve also added some further photographs of the race below. 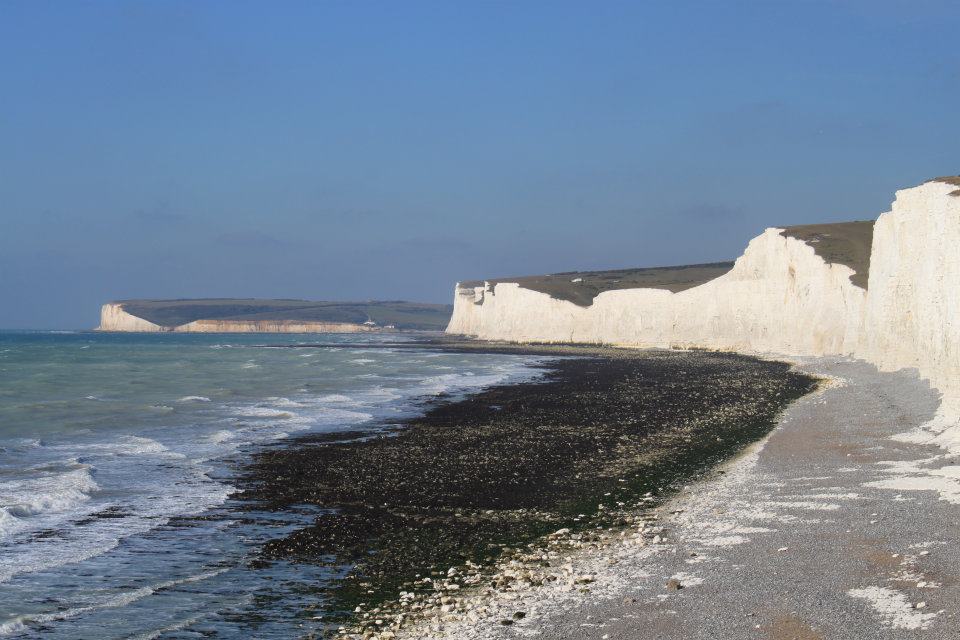 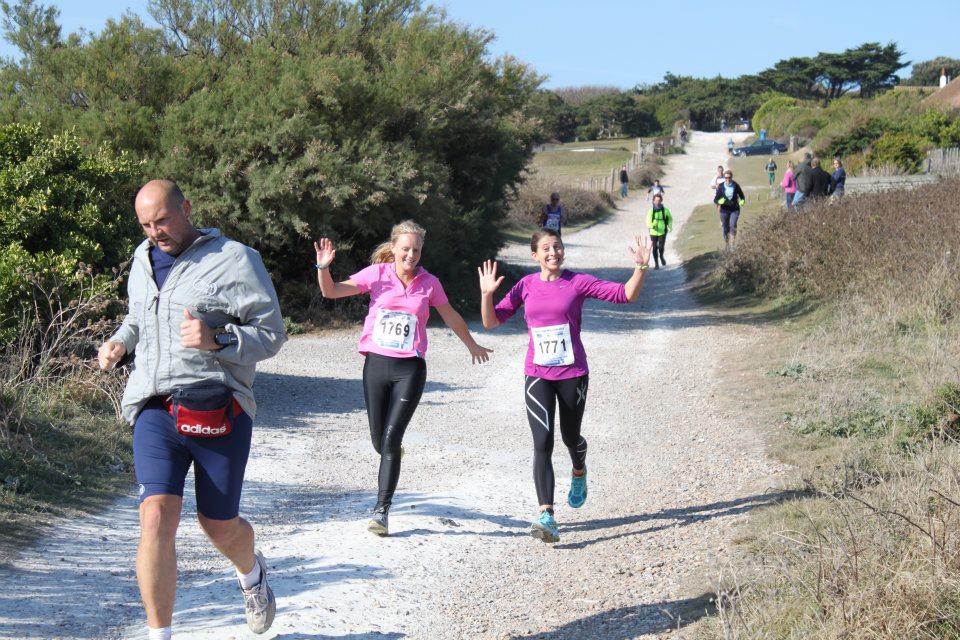 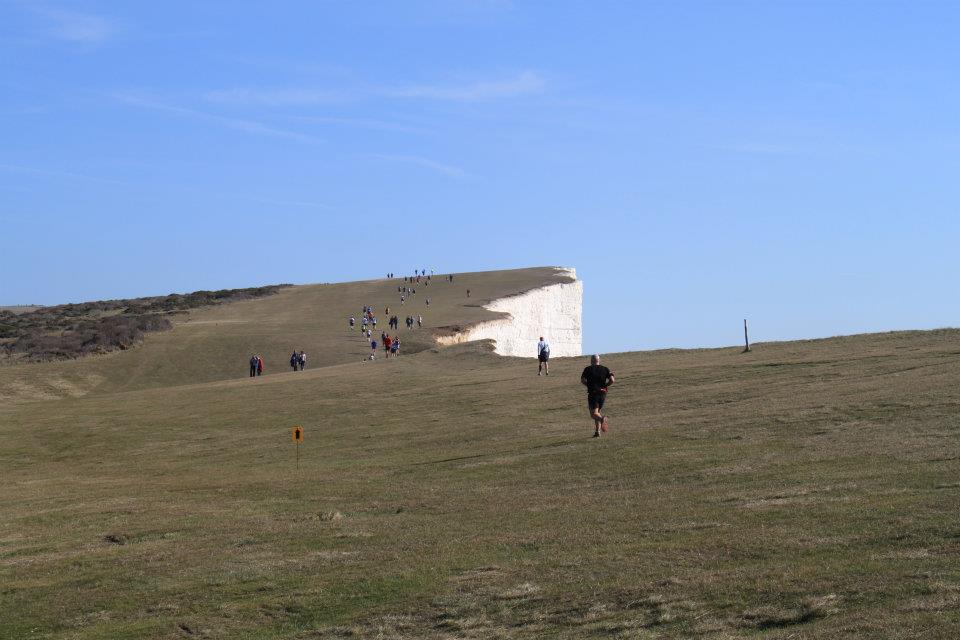 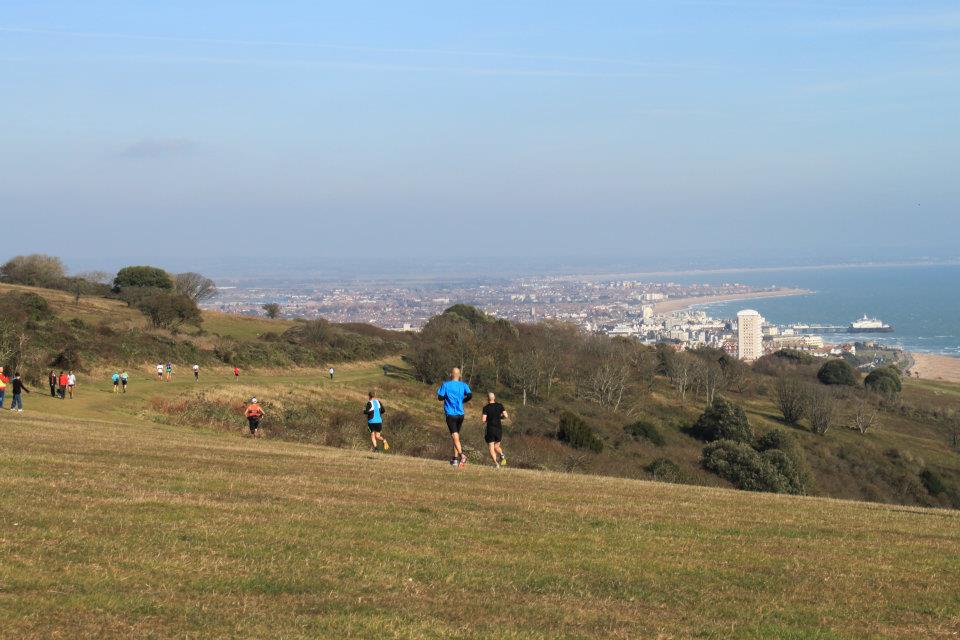 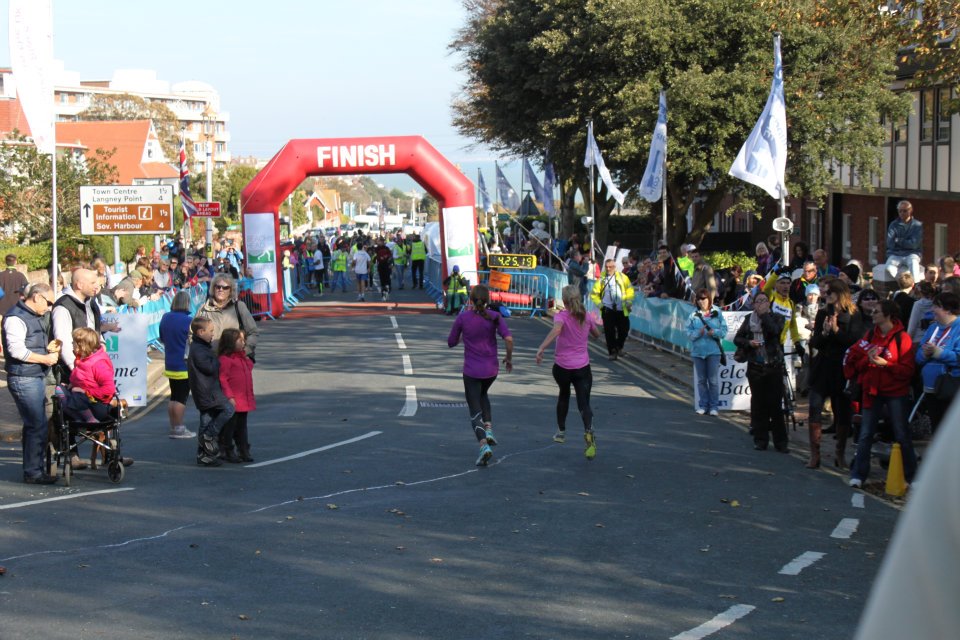 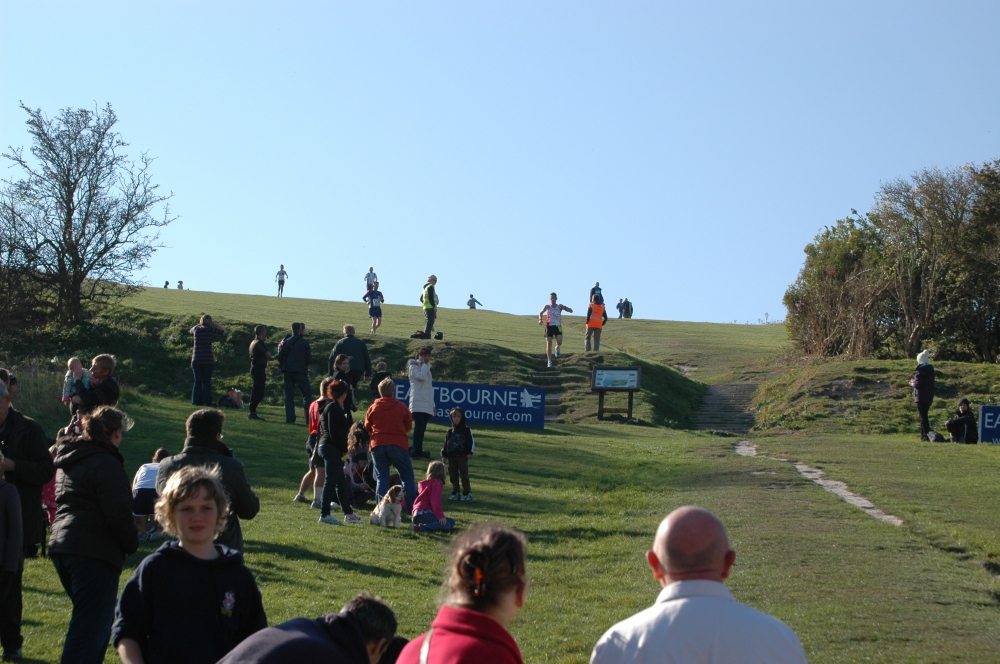