Every year, for 48 years, an absurdly wonderful thing has happened in a ragged field of sheep off the A702 close to Edinburgh. Every year, a group of hill runners assemble, facing the two highest peaks of the Pentlands, Scald Law and Carnethy Hill. The pipes fall silent, runners are brought to their marks, and, like a 14th century army they charge across tussock and bog, destined for a higher place.

The Carnethy 5, as this gathering is known, is Scottish hill running, and Scottish hill running is the Carnethy 5. No race in our niche sport north of the border is bigger, outnumbering the Ben Nevis Race for finishers, or quite such a logistical challenge – all for the price of around 14 per cent of the Glen Coe Skyline. The February half-term date adds to the aura: the weather and conditions can be benign, but they can also be frightful. (This year, the yellow weather warning for high wind is due to end two hours before the race starts, but only after the ground has been saturated by what looks like 48 hours of incessant rain).

Friday night update: the MWIS is predicting wild weather for Saturday: ‘Walking widely very difficult most of the day with severe wind chill and buffeting… Feeling closer to -20C in direct exposure to wind.’

The prospect facing runners is not, on the face of it, terribly daunting, even in 50mph wind: five summits, five-and-bit miles and nothing terribly technical, fearfully steep or especially dangerous, but the fell running cliches of lung-busting, thigh-burning, heart-thumping are entirely appropriate here. As it was for the 14th century warrior, there is no room for half-heartedness for the Carnethy 5 competitor. This one will hurt. 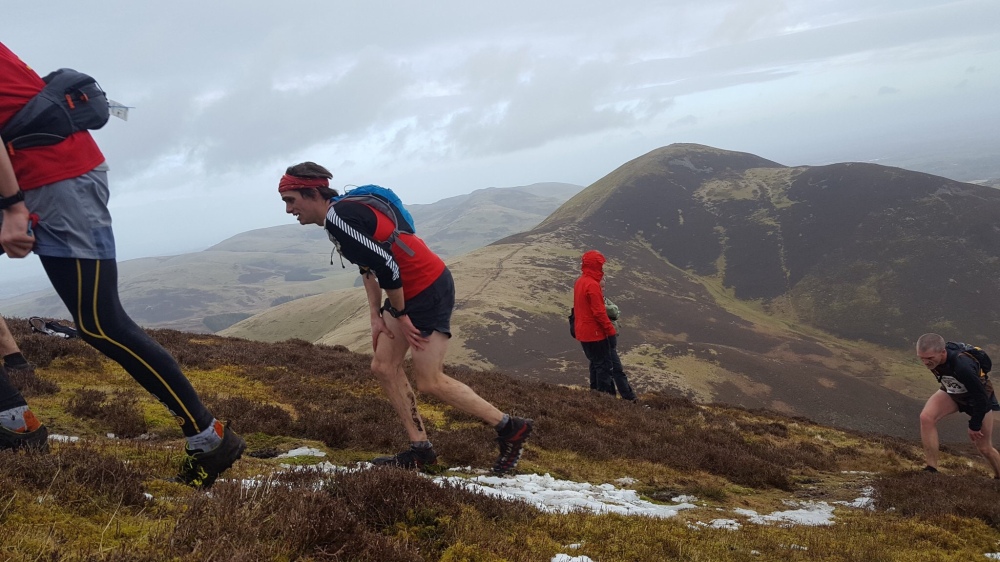 To win here you need to be a champion. You need to be Finlay Wild or Pauline Stuart or Carl Bell or Angela Mudge or Rob Jebb or Kenny Stuart or Dave Cannon.

I was chatting to a runner – one of those listed below – about the Carnethy 5 earlier this week. ‘I don’t know why it’s so popular,’ he remarked. ‘It’s horrible.’ Then I told a work colleague about the race. ‘Sounds horrible,’ she also concluded.

I nodded agreement, both times. There is, of course, beauty in such horror – and the Carnethy 5 knows how to attract those people who seek such juxtaposition. Just look at these lists.

It’s not for me to pick a winner from that lot. They have entered (according to the SIEntries list), but, of course, they may not make the journey to Penicuik. Or they may be out of form, returning from injury, or 50mph winds may not be their thing on this particular Saturday afternoon. I have almost certainly missed names out too.

Wouldn’t it be great to actually win the Carnethy 5? I will never know. I would be ecstatic to break the hour – a prospect that diminishes as this wet front edges ever closer to the Pentlands.

Winning would be great, but so is just being here, for when you run the Carnethy 5 you feel part of something special, something that matters in an absurdly wonderful way. I’ll return to the post-race words I wrote last year.

As I sit, teeth chattering, by a piece of gorse before the start, I notice Carl Bell, the reigning British hill running champion, in a neighbouring bush. There is no VIP tent here, no special treatment. Bell will win the race by a minute. Thereafter – I assume, of course; I was still somewhere up high on Carnethy – he returned to his gorse, retrieved his belongings, shivered a bit, drank a lukewarm cup of tea, and looked back to the hills he had just run down from. Just like the rest of us.

Tim Farron, the hill running MP, has highlighted the ‘egalitarian’ nature of fell running. ‘Complete also-rans like me can take part in the same race as first class athletes like Rob Jebb,’ he has said. That is hill running in a nutshell – or a microcosm.

There lies the brilliance of the Carnethy 5: a challenge of self-reliance, a celebration of the toughness of nature, a reminder of who we are and where we come from, a community of different sameness – the ultimate microcosm of a sport.

See you on the hill!