The field lies open and exposed, looking up to Scald Law and Carnethy, the highest points of the brown and grey Pentland Hills. Above a saturated bog is a hummock of low grass, decorated by clumps of scruffy gorse. Runners cower in the vegetation, squatting on ground littered with sheep droppings, pinning numbers on vests, wondering what they are doing here. The wind blows hard and blunt. I wonder why I am here too; I know that feeling too well. But it could be worse, I determine. It was in 2016.

We arrived to the apocalypse: amid a sodden, snowy wasteland stood a cluster of tents containing half-starved shivering people, clasping hot liquid and looking across to a hazy white chaos encasing the hills, all wondering the same thing: what the hell are we doing here?

I’ve long pondered – typically before entering – the appeal of the Carnethy 5, a race that summits five hills of the Pentlands in a little under six miles. It is a scrappy, relentless affair, always run in mid-February when conditions are certain to be ‘challenging’, in which the runner will spend at least two-thirds of the time climbing yet paradoxically it is the descents that are so committing and crucial.

On Saturday, 498 finished, 10 more than at the Ben Nevis Race in 2017. In terms of finishers, there is no more popular hill race in Scotland than the Carnethy 5. Runners travel hundreds of miles to be here, spending hours journeying from as far away as the Highlands and the Lake District, and across the sea from Northern Ireland.

What is it, then, about the Carnethy 5?

As an English teacher, I occasionally find myself explaining the concept of microcosm and macrocosm in literature – the idea that the miniature symbolises the whole. Golding’s Lord of the Flies is perhaps the best example. Let’s apply that idea to the Carnethy 5. The race is the microcosm; hill racing the macrocosm.

After publishing an article on the growing frustration over online entry, I was sent the following message, expounding the popular idea that fell and hill running is losing a sense of its roots.

‘I think it was Bill Smith in Stud Marks on the Summits who identified self-reliance, nature and history as being the three things that make fell running special. I’d add community.’

At the most recent Carnethy Hill Running Club winter series talk, I asked Olly Stephenson, Carnethy 5 race organiser, how bad conditions would have to be to force cancellation. Olly explained that he trusted the runners and their respective capabilities; it was the safety of the marshals that is of greater concern.

Imagine trusting 498 people who you do not know personally to follow a particular course and a set of instructions, to carry the right kit, to look out for one another, to not put themselves in danger? Impossible? Not in the self-reliant world of hill running.

See it from the other side. How often are we trusted – at work, when we are trying to buy a bottle of wine at a supermarket, when passing though airport security – as a credible, capable adult? Again, in this world we are. Up we go. Through bog, over stream, onto pathless hillside, across snow-streaked heather, along a hail-blasted ridge, down a slide of slick grass, up a gully that rises like the long, slow, straight track of a rollercoaster, then down, down, down, over the skeletal roots of muirburn heather and tumbling scree that takes us back to the bog and gorse of the start.

Races come and go. The Carnethy 5 has stood the test of time. This was the 48th edition, dating back to the days when Edward Heath was prime minister. Winners here are champions: Angela Mudge, Pauline Stuart, Rob Jebb, Kenny Stuart, Dave Cannon, Finlay Wild. Anyone who is anyone in hill running has raced in these hills, has felt the gathering lactic as they ascend Scald Law, has felt the bitter sting of the February blast.

Jimmy Jardine, a veteran of 46 races and whose idea it was to hold an event to commemorate the 1303 Battle of Roslin, can have no greater legacy. Inspired by the history of these hills, he has created more history than he could have imagined.

As I sit, teeth chattering, by my own piece of gorse before the start, I notice Carl Bell, the reigning British hill running champion, in a neighbouring bush. There is no VIP tent here, no special treatment. Bell will win the race by a minute. Thereafter – I assume, of course; I was still somewhere up high on Carnethy – he returned to his gorse, retrieved his belongings, shivered a bit, drank a lukewarm cup of tea, and looked back to the hills he had just run down from. Just like the rest of us.

Tim Farron, the hill running MP, has highlighted the ‘egalitarian’ nature of fell running. ‘Complete also-rans like me can take part in the same race as first class athletes like Rob Jebb,’ he has said. That is hill running in a nutshell – or a microcosm.

There lies the brilliance of the Carnethy 5: a challenge of self-reliance, a celebration of the toughness of nature, a reminder of who we are and where we come from, a community of different sameness – the ultimate microcosm of a sport. 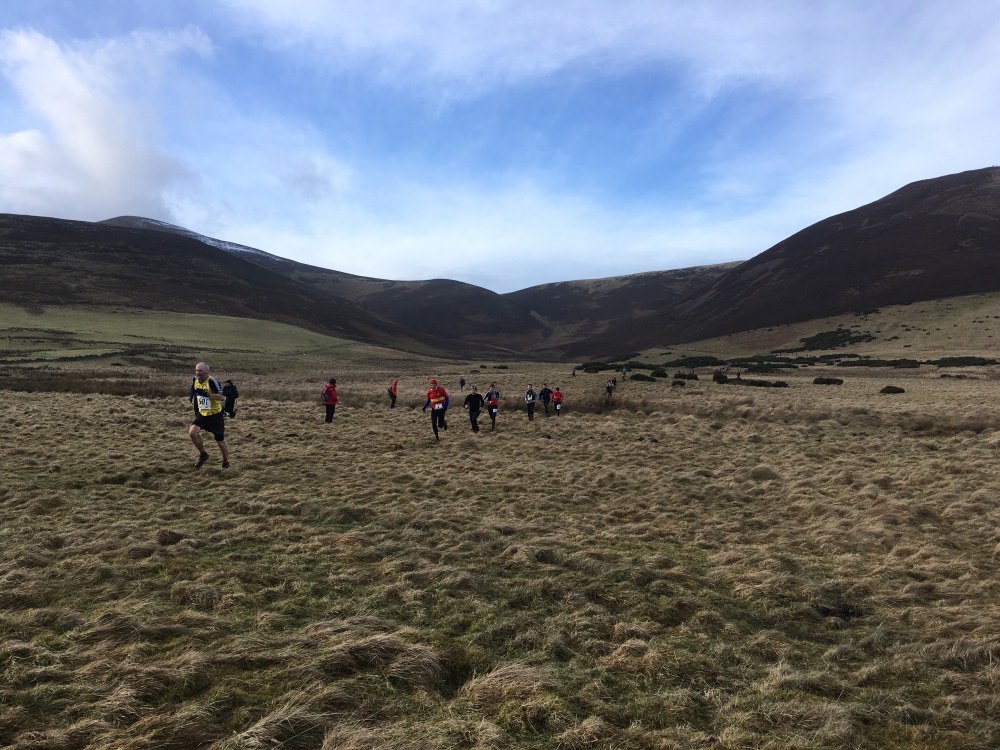