Some years ago I was running in the Caerketton Hill Race, an eyeballs-out, up-and-down charge starting and finishing at Hillend, the north-eastern terminus of the Pentland Hills. I was descending the steepest section of hillside – a pathless slope of ankle-deep vegetation, dripping wet from afternoon rain. A woman catapulted by, almost clipping my left shoulder.

In a moment, she was midair – and another moment later crashing headfirst into the heather, arms and legs flailing behind her. I thought then of one of those adverts that warn about the danger of speeding, as you watch in slow motion as helpless shapes crumple into a dashboard.

She must have broken her neck, the unknowing bystander might have thought – or worse.

If she had, you would not have known, for she was already up on her feet, already moving again downhill, moving away from me.

I realised in the few seconds of fall and rise that she had not made a sound.

She is a hill runner, you see.

I was running in a groove of flattened grass and sloppy mud parallel to what is known as the Drove Road – an historic cross-Pentlands track that had been butchered by nearby forestry work. The eastern section of the 17-mile, 16-summit Pentland Skyline had been accomplished, from the northerly tops of Caerketton and Allermuir, moving south to windy Castlelaw, then onto the meat of the range over Carnethy Hill and Scald Law. 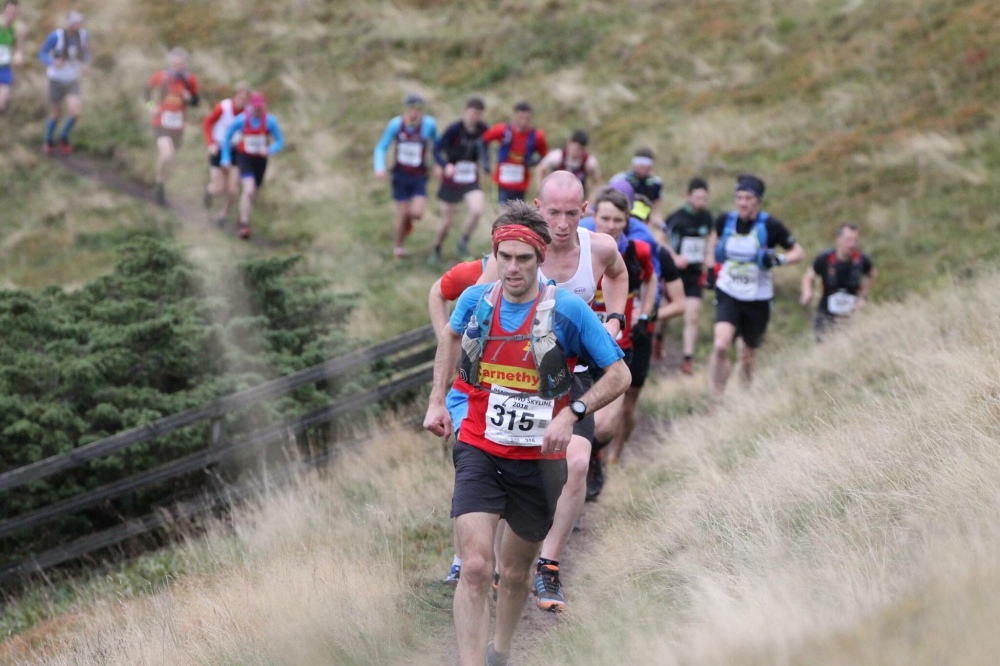 I fall. For a split second, I fly – and then I hit the ground, sliding uncontrollably forward like a footballer celebrating a goal in a belly first lunge towards a corner flag.

I taste grit. It is better than blood. Instinctively, I know I am fine, however spectacular the fall may have been. The runner behind catches up. ‘Okay?’ he asks casually. I do not need to answer. Of course I am. I continue running, then open my right palm, revealing a handful of sweets now covered in the gloop of the Drove Road. Needs must. They will not go to waste.

I am a hill runner, you see.

I went to the Pentlands again the next day, drawn insatiably by that simple combination of sunshine and blue sky, and a glorious autumn stillness that lay over Edinburgh.

I was still bathing in the afterglow of the Pentland Skyline – a glow not of glory or victory, but a glow of satisfying effort, of trying as hard as you can in the circumstances of preparation and execution. 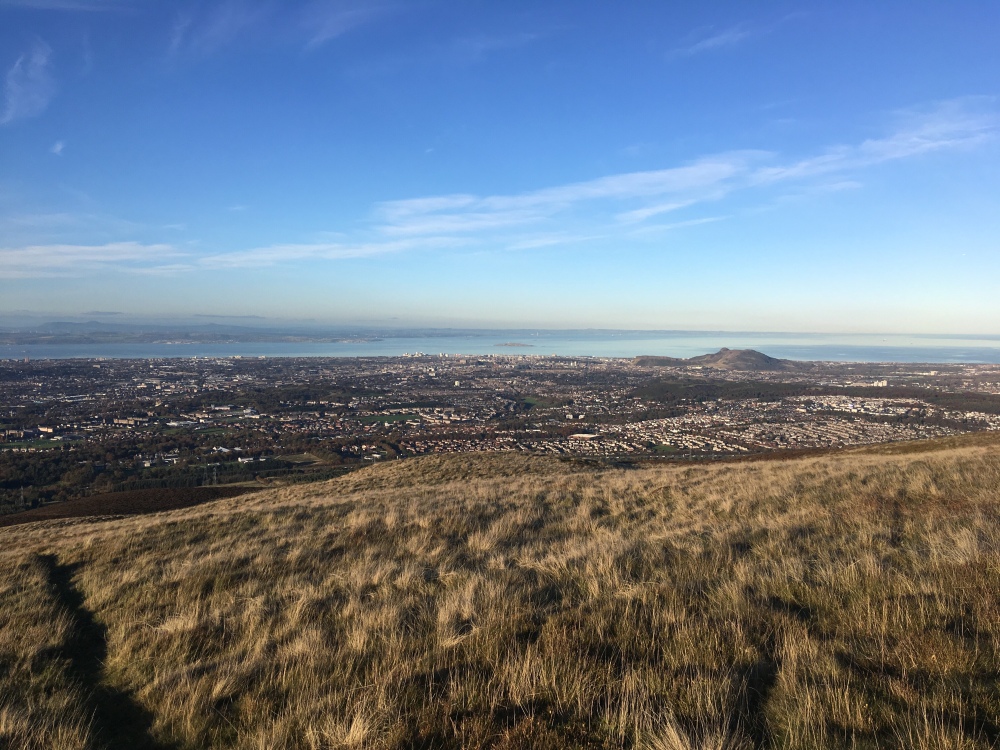 I was walking this time, joined by my five-year-old daughter on what would be her first ascent of Allermuir. I do not care if she is a runner, let alone a hill runner, but I want her to possess at least an inkling of the brilliance of mountain landscapes. I did not need to try hard. The hills were pin sharp against the sky; Caerketton rose impossibly high and obviously inaccessible; our shadows were thrown 50 metres behind our backs.

We greeted a descending Stewart Whitlie – as close to an expert on the Pentland Skyline as there is – on the final wedge of Allermuir, silhouetted by a low, blinding sun, and another (despite ‘trashed’ legs) who could not resist the calling of the Pentlands on an afternoon like this.

We paused briefly on the summit, then dropped to a minor plateau overlooking Capelaw. We ate tomato soup and bread, drank hot chocolate, and toasted marshmallows. We sat, we read, we ran around, we watched. The sun descended before us, gradually dimming the hills until they were dark outlines against a gold-edged sky. Far below, traffic on the Edinburgh bypass was at a standstill – a line of red, a line of yellow. 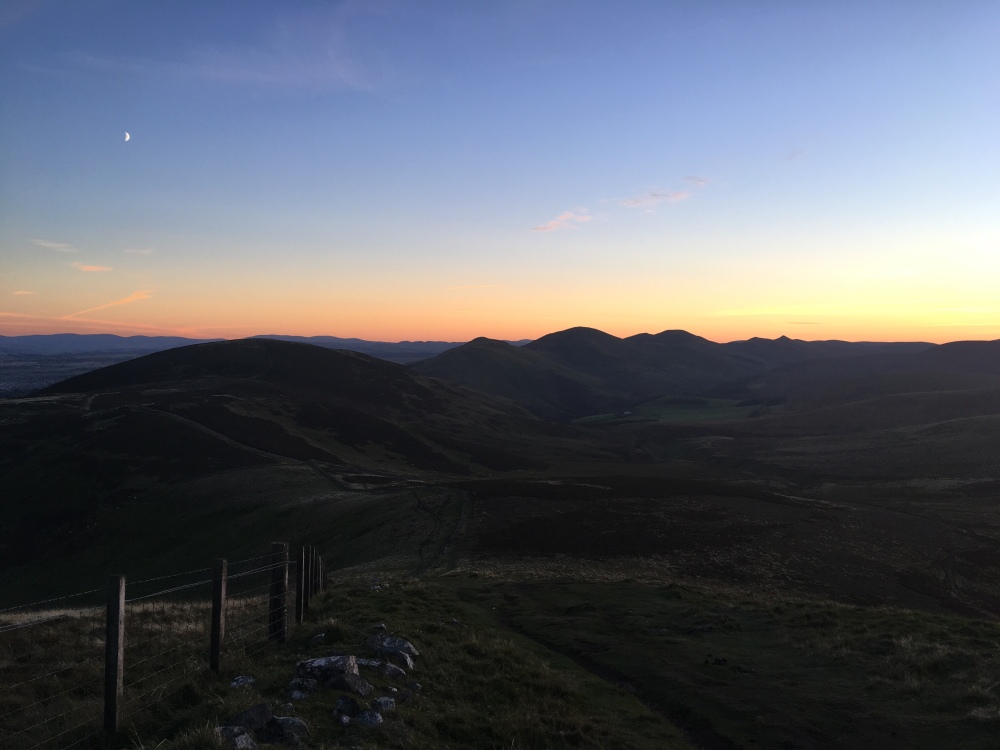 Hand in hand, we jogged downhill as the lights of Edinburgh began to prick the evening gloom. I felt her body jolt, her weight thrown forward by the trip. Our grip is solid. I hold onto her like a kite, then her two feet are back on the ground.

‘Oh – my – goodness,’ she mouths deliberately. A small face, lips smeared in tomato soup and hot chocolate, cheeks flushed, looks up to me. ‘Can we run a tiny bit faster?’

She is a hill runner, you see. 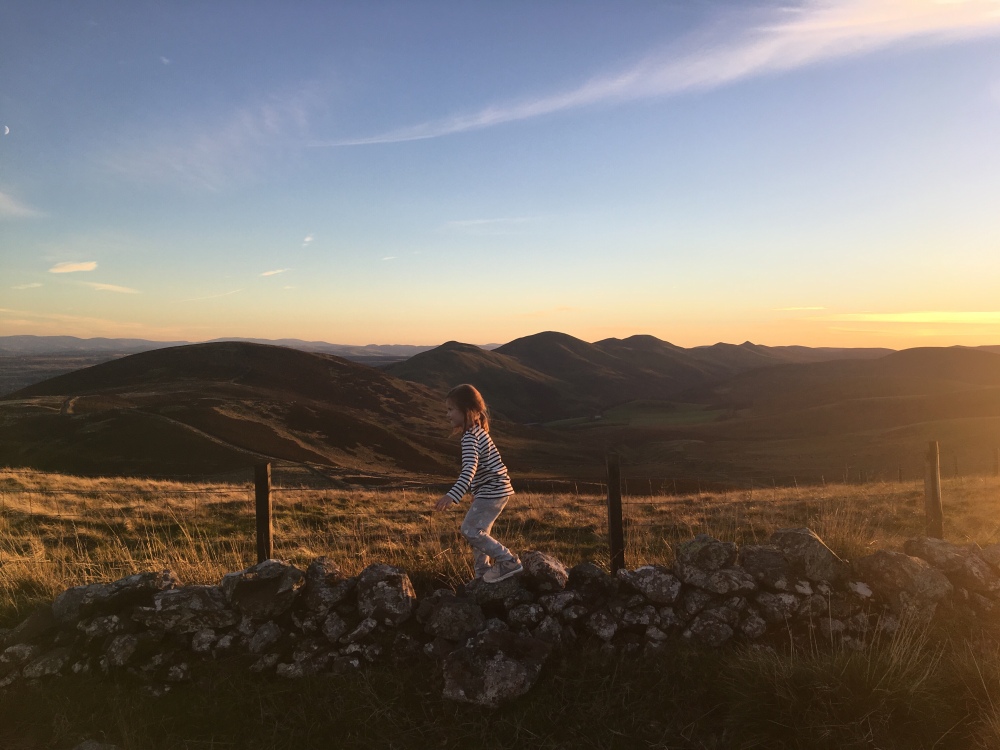