As the years go by, like Friends, the Glen Coe Skyline has an episodic quality to it.

Kilian Jornet won the Glen Coe Skyline for the second time this year (24 hours after triumphing in the Ring of Steal). Extraordinary. There is no other adjective for it. The women’s race was exceptional too, as Hillary Gerardi out-sprinted Jasmin Paris to win by a few seconds. But this year the weather won, or more accurately, Scotland won. So 2018: The One When Scotland Won. Unpredictable, venomous, beautiful, victorious Scotland.

A bad weather course for the Glen Coe Skyline had been devised for good reason. This day was going to come. This is capricious Scotland, after all. Even though runners are vetted for experience (and so are theoretically more qualified and capable), the writing was on the wall on Friday afternoon, with the MWIS forecast predicting winds of up to 60mph and heavy rain on race morning. A race organiser can only be so gung-ho; ultimately, the pragmatic approach was the right one.

Bad weather route, it would be, but with a twist – Curved Ridge, the exposed, airy scramble to Buachaille Etive Mor, would remain part of the race. When I arrived – having already negotiated a blustery half-dozen or so miles on the West Highland Way – the run to the start of the scrambling section was already a churned up line of muddy footmarks, with tresses of heather as handholds. The rock was wet and slippery, making every step deliberate and necessarily cautious.

‘The climbing starts above,’ a man shouted. They were ominous words to the ears of a non-climber who already thought he had started ‘climbing’.

Even as I write now, the memories of the half-hour I spent on Curved Ridge have faded. A few seconds only are sharp in my mind. I was faced with a groove that seemed to have no obvious way up. I sensed two or three other runners gathering behind, watching and waiting. A dreaded bottleneck. ‘I’m sorry… sorry,’ I spluttered, while staring blindly again at the wall, before finally beginning to climb, slowly but surely finding safe places for hands and feet, and dragging myself to the top of this particular rock obstacle, and feeling a smidgen of the heart-lifting high real climbers must experience when they solve the puzzle of near-vertical places. It was windy on Buachaille Etive Mor – very windy, I suppose – but in all the bluster about the weather, I had forgotten what actually makes the Glen Coe Skyline so supremely hard – the course. Such as the descent of the Buachaille to Lairig Gartain: steep, slabby and greasy; a place that requires intricate movement yet in the context of travelling as fast as possible. And then the long ascent from the same glen, up a sodden line of path-cum-stream to a wind-battered col, before picking a way across loose rock to the summit of Stob Coire Raineach. It is relentlessly hard. Even when going downhill to join the bad weather route that crossed the A82, the path weaves down manmade staircases where one slip will send you skidding to the ground. Passing the left turn that continues onto the normal route towards Stob Coire Sgreamhach and Bidean nam Bian, the thought of actually taking that path today was unbelievable. How had I ever done the whole thing? 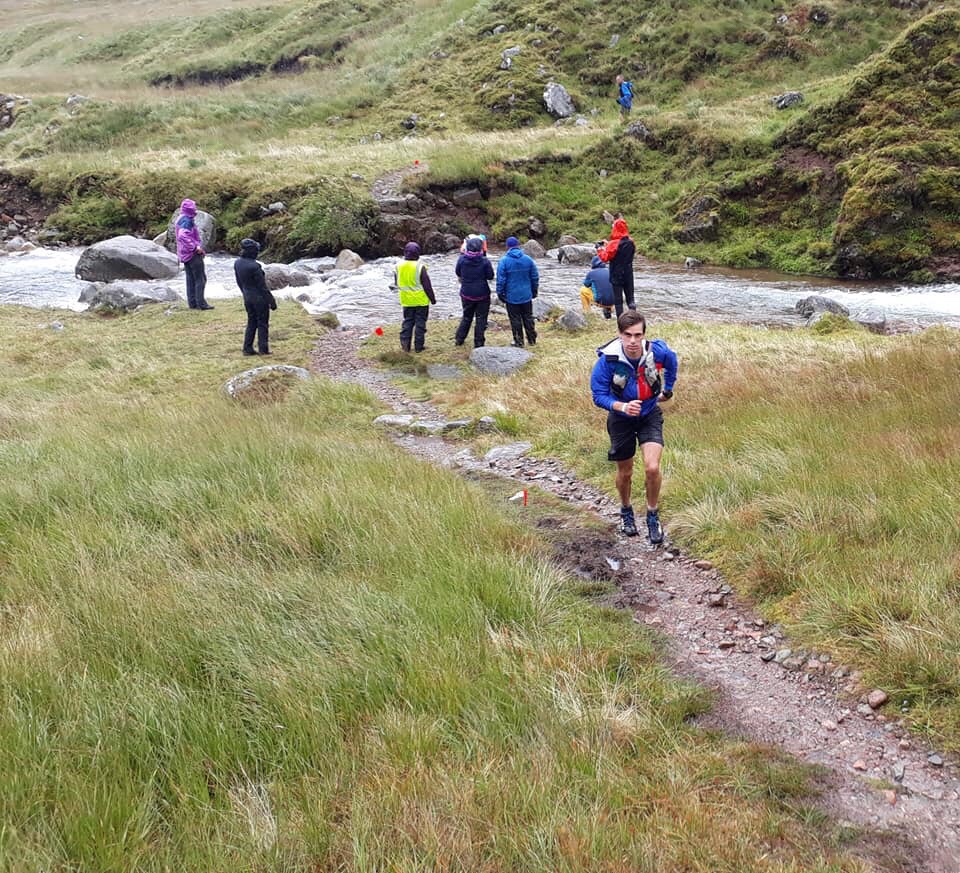 In truth, the weather was not that bad. The wind did not feel like it was blowing at the speed limit of the cars on the A82. It was more the cumulative effect of the conditions – the wind, the on-off rain, the mist, the saturated ground – that burned just a few more calories, that required just a bit more concentration, that demanded a little more resilience, that took its toll.

Moving (because I was not running) in around 50th place up a pathless slope of long grass to Sron a Choire Odhair-bhig, I was very tired. We all were. We walked, never stopping of course, but wearied by it all. I rallied downhill, first to regain the West Highland Way, and then on the long downhill return to Kinlochleven, overtaking three or four people. It seems inconsequential now; at the time it was life and death.

Later, as I drove home to Edinburgh, I passed over Rannoch Moor, looking like Rannoch Moor should: besieged by mist, wind-cursed and just very, very wet. I was terribly proud. What a country we live in, what hope and horror it offers. And so, the 2018 Glen Coe Skyline: The One When Scotland Won.

Read more about hill running and racing in Scotland in The Mountains are Calling.