Day 32: ‘Fell running – the key to women’s lib’: ‘They achieve equality in running the same courses as men, getting equally wet and muddy as men, and running faster than men.’ Up and Down magazine, 1990. 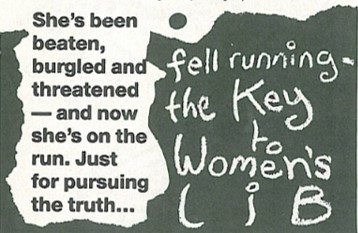 Day 33: ‘What is it about grassy knolls, viewpoints, or even Munros, that makes people instantly want to get to the top of them?’ Suse Coon asks. It is not a simple answer. 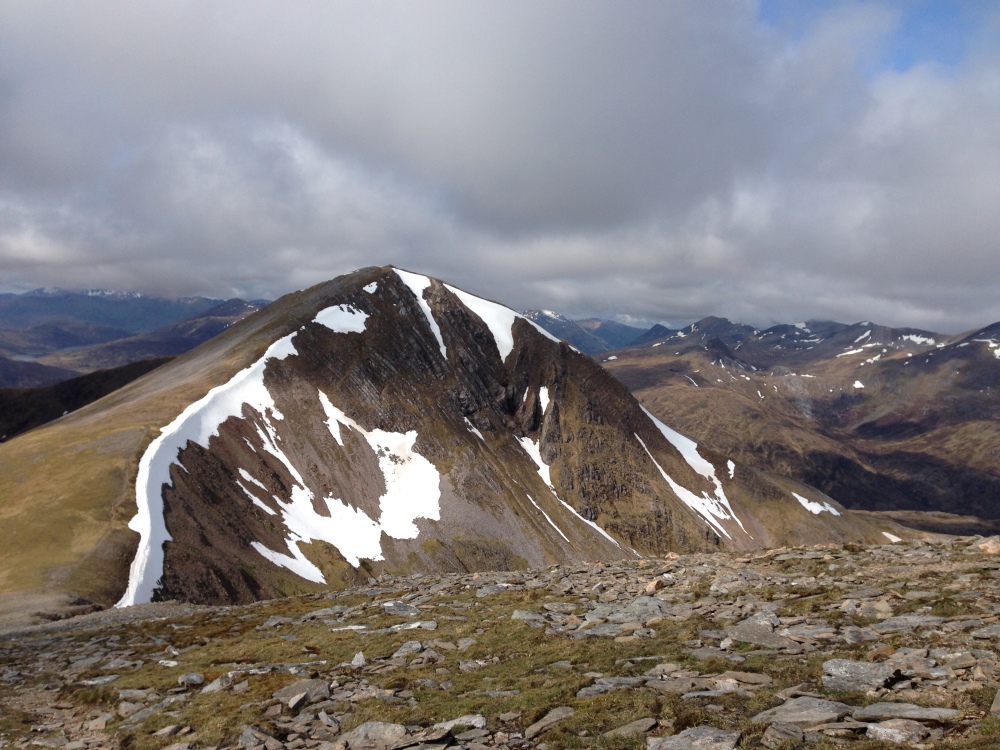 Day 34: @ShaneOhly’s attitude to the @theomm: ‘I ask myself, “Am I doing the best possible job, right now, that I am capable of today?” If the answer is not “I am at 100% effort,” then I just try harder, no matter how badly it hurts, I just push harder.’

Day 35: The finish line scene at the end of the world’s first hill race in 11th century Scotland: ‘They lay all three, within a few paces of each other, but they panted so strongly that their bodies seemed to rise of themselves from the ground.’

Day 36: With two summits to go, Roger Smith (centre) races the clock on his Bob Graham Round: ‘I didn’t dare look at my watch, but I felt that time was racing away. I wanted to stop but I couldn’t. I kept praying: “Please let me get there. Please don’t let me fail now.’”

Day 37: ‘It can rarely be worthwhile to hazard life on the uncertain issue of a game. If the adventure is good enough, however, it may seem well worthwhile to take a good many chances.’ – Geoffrey Winthrop Young in Mountaincraft (1920)

Day 38: In memory of Robin Morris, who died on Sunday and gave hill running in Scotland freedom from England: ‘Scottish independence from the Fell Runners Association was not only important, it was almost an imperative.’ 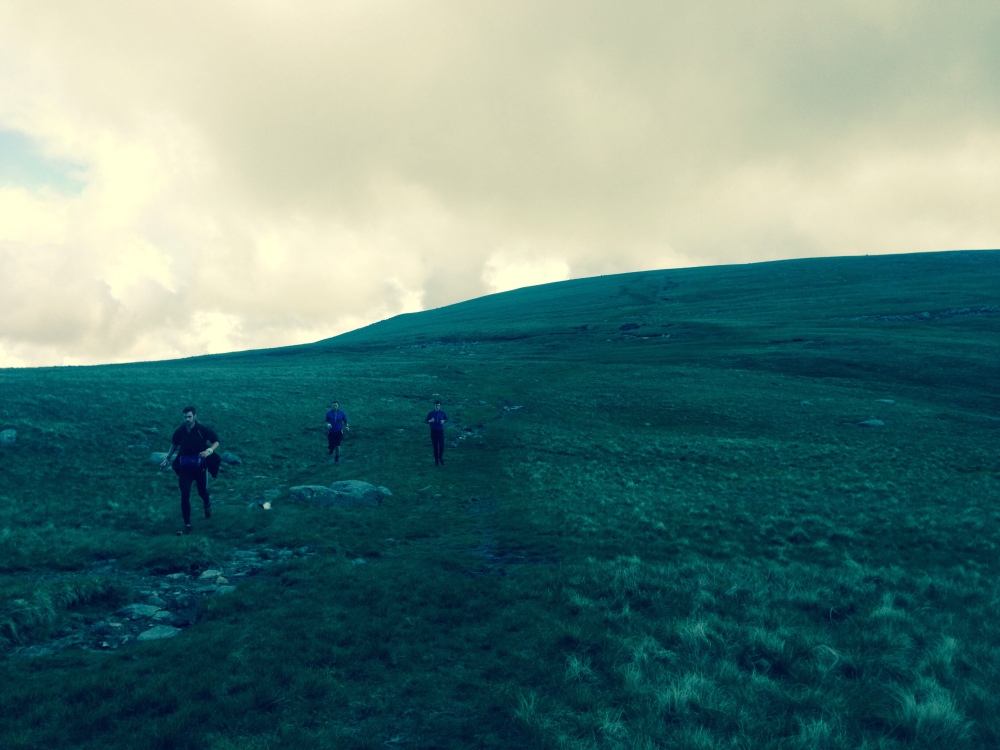 Day 40: Runners at the Carnethy 5, taking place tomorrow, climb into a snowstorm in the 2015 race. Over to Robert Louis Stevenson:

‘Black are my steps on silver sod;

Day 41: Joss Naylor, 82 today, on his seven-day run over the 214 Wainwrights: ‘I just do not have words suitable to describe the discomfort, the physical pain, the frustration and the worry we all had to suffer.’ 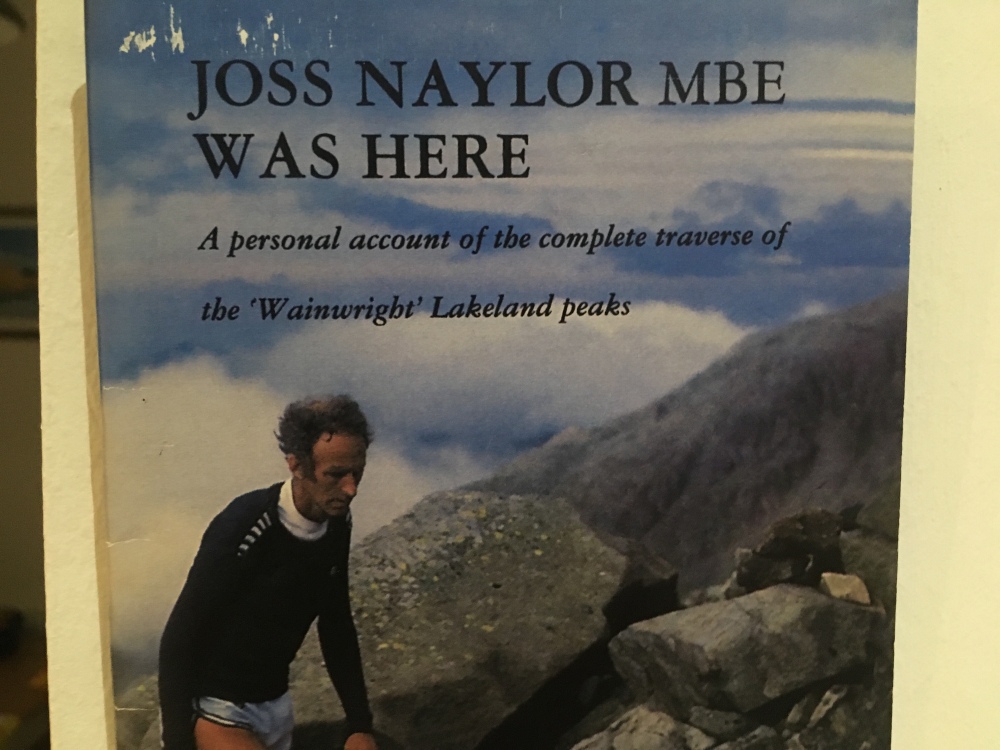 Day 42: ‘To pit oneself merely against other players, and make a race of it, is to reduce to the level of a game what is essentially an experience. Yet what a race-track for these boys to choose.’ Nan Shepherd, born today in 1893, on her beloved Cairngorms. 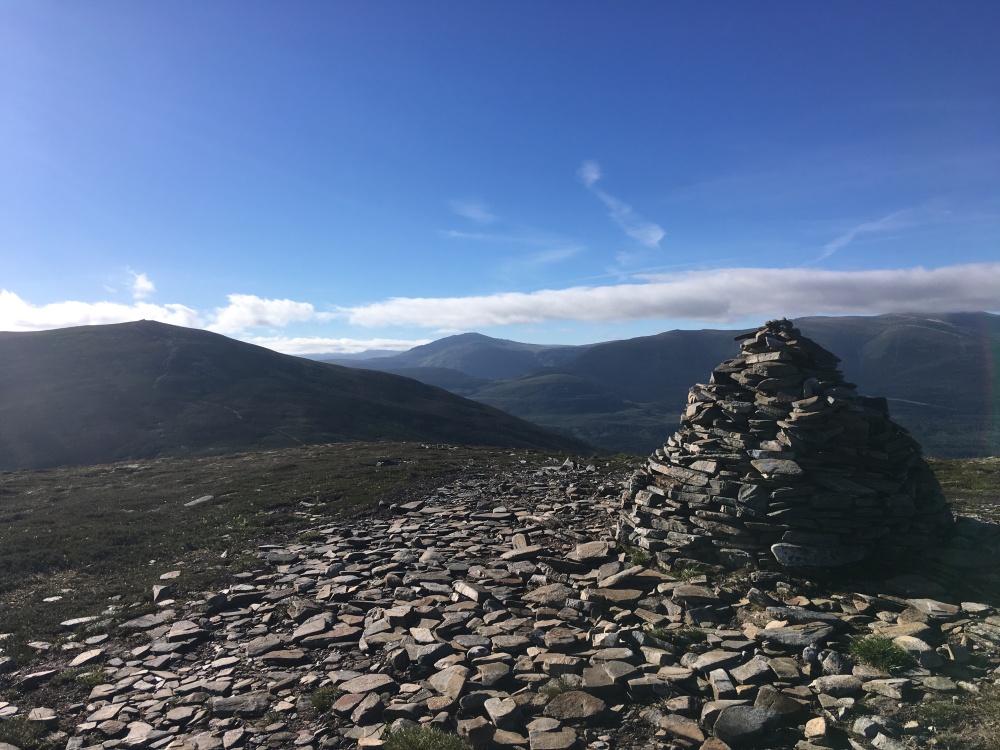 Day 43: ‘The hills make us feel small and free at the same time, putting everything into a new perspective. Out there, through their inescapable magic, the past and the future are set aside, and we just are here, now.’ @runslessepic on simply being. 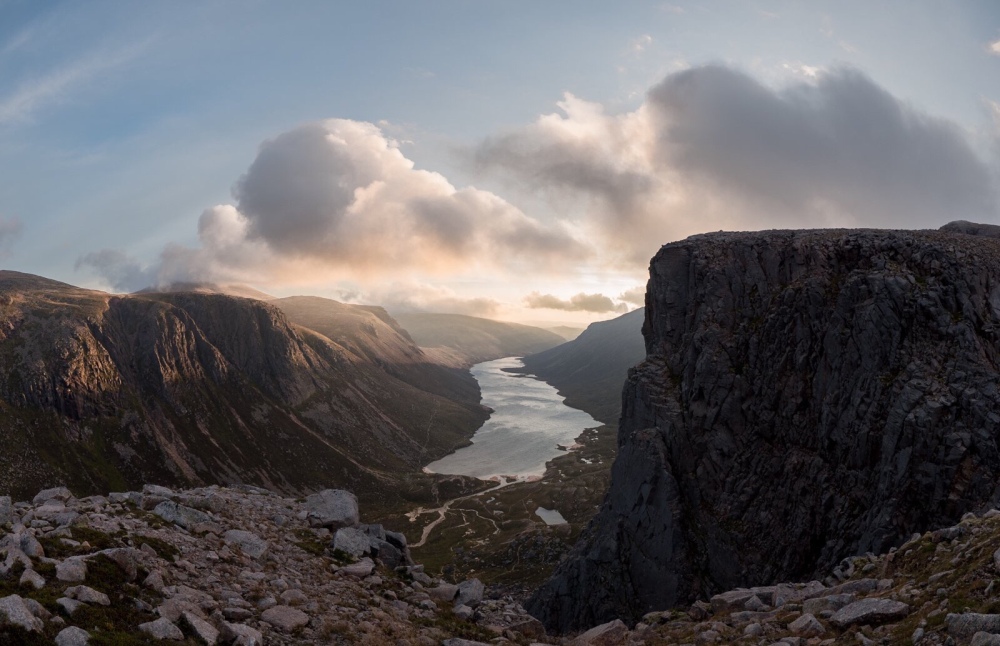 Day 44: The mantra of Charlie Campbell as he ran 284 Munros in 49 days: ‘Don’t fret if you find your body cannot run. Just remember to feel the ground beneath your feet – every stone and tussock. Become part of the earth.’ 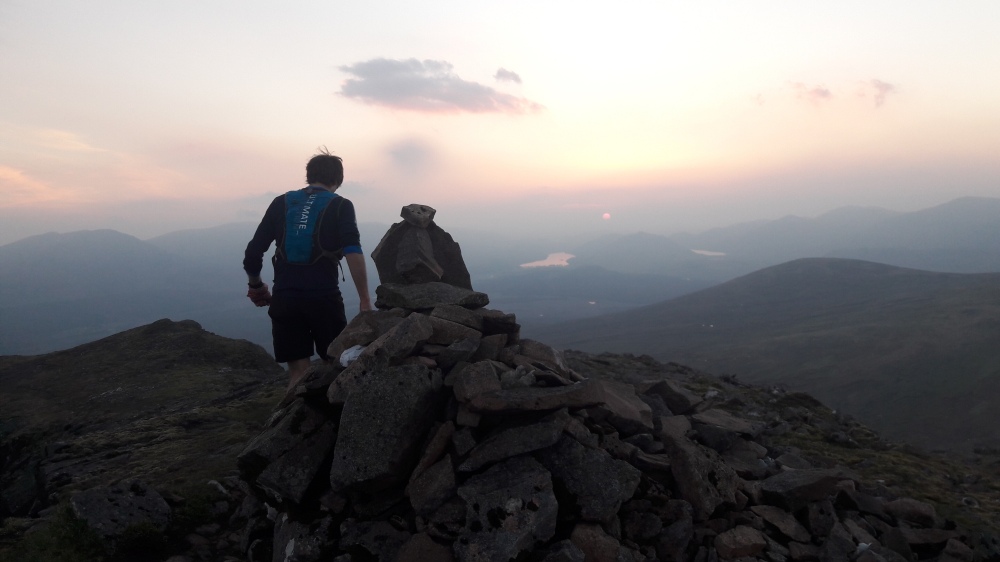 Day 45: John Lenehan encapsulates the gulf between running and racing: ‘I am a 61-year-old fell runner. I used to be a fell racer and there lies the difference. Fell racing hurts.’

Six Kilometers up the forest road

I need a pull uphill and once more I’m overtaken

By the boundless freedom

Of breath and a heart for running

Cut by the cold and

Jumping into the stream

The soaked heat of my socks.

Day 48: John Muir on good mornings: ‘How glorious a greeting the sun gives the mountains!’

Day 49: Why @kilianj runs: ‘The mountain is a blank canvas, and I’m the paintbrush that refuses to obey a paint-by-number pattern. Running provides my imagination with the means to express itself and delve into my inner self.’ 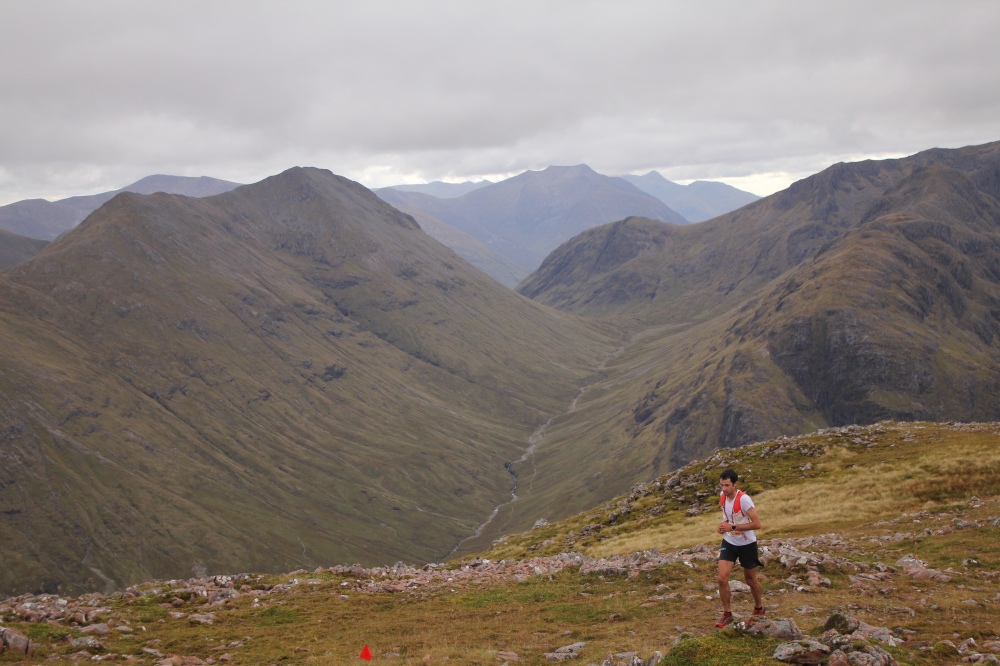 Day 50: Chris Brasher on the Bob Graham 24 Hour Club: ‘(It is) the most exclusive club in the world because you cannot buy your way into it… you become a member only by accepting the challenge of those 42 peaks…’

Day 51: Billy Bland, Bob Graham Round record holder, on talent, as told to @steev8: ‘I certainly wasn’t the most talented. I had a talent for running downhill, and my only other talent was for training hard.’

Day 53: @fellrunningguid listening to the snowy, winter hills of the Peak District: ‘Sounds carry: the tinkling of the icy brook… the dripping of thawing icicles on gritstone boulders… the frosty remains of expanding bracken.’ 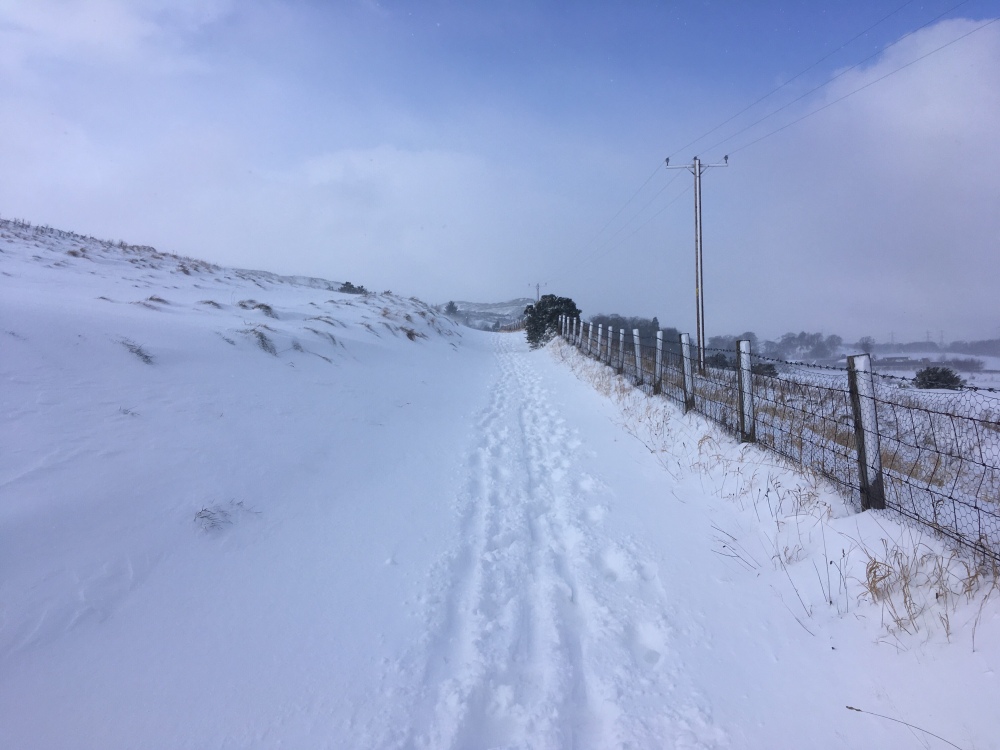 Day 54: Running Mr Sparkle’s Dark ‘un tonight? All the essential information is here, including: ‘Sorry, but pub can no longer provide chip butties.’

Day 55: ‘Mountains are there to be enjoyed, and enjoyed leisurely. I could never have travelled at speed on foot, nor have I ever wanted to.’ Alfred Wainwright – as forthright as ever – on fell running and the Fairfield Horseshoe.

Day 56: A view from the middle: ‘There is an unspoken solidarity among “pack” runners to cajole, joke and motivate – to keep moving upwards, preventing festering thoughts of defeat, and focusing ahead; always towards the next horizon.’ The Joy of Fell Running

Day 57: @SJBirkinshaw on his seven-day Wainwrights round, writing in There is No Map in Hell: ‘Sometimes it has felt like a hell that was never going to finish… I have carried on and on, pushing myself harder and further than I have ever done before.

Day 58: Race tips: ‘You’ll decide that the little dried-up beck on your map is a raging watercourse of Evian… You’ll see the bog surrounding it and decide that ’tis the season for bilberries… Nav? Well, I’ll just follow the guy in front.’ Racing: Style, Secrets and Tips

Day 59: @EsTresidder on his then-fastest traverse of the Cuillin ridge: ‘The valley was slowly enveloped in a sea of mist, leaving the ridge the only thing floating above in the sunshine. It was like running in heaven.’ Cuillin Ridge Record