The year is 1889, a time before television, tea bags and Twitter. Queen Victoria is the monarch; Jack the Ripper is stalking the East End; Britain rules a third of the globe. In Milkwood Road, Herne Hill, an institution is born: an athletics club called Herne Hill Harriers. There was war and peace, Bing Crosby and The Beatles, but there was always Herne Hill Harriers. Thousands of athletes and thousands of memories.

The year is 2014. Herne Hill Harriers is 125 years old. The call had gone out: 125 athletes to celebrate each of Harriers’ years. A Wimbledon Common beneath blue skies beckoned for the third of four winter Surrey League cross country fixtures. Harriers’ senior women set the racing wheels in motion, with Karen Ellison in 13th leading home a squad of 26. Thereafter it was a family affair. The club’s second woman was debutante Fiona Brown, mother of absent superstar daughters Alex and Kate. Helen Hadjam, Harriers’ third finisher, would later watch her husband, Mohammed, compete in the senior men’s race. Another mother, Claire Millard, also made her debut in the colours of Herne Hill, before watching her daughter, Saskia, win the U15 race and her son, Oscar, come second in the U13 race. Eloise O’Shaughnessy was a dominant individual winner in the U13 race; her sister, Skye, was third U17.

There was more: Millard had led the U15 squad to a team victory; Paul Burgess was first U15 boy; Turkay Korkmaz narrowly pipped Oscar Millard to first place in the U13 race; Susan Glinska, meanwhile, rolled back the years in the senior women’s race, reminding onlookers of her glory days in the 1980s and 90s.

As the minutes ticked down to the start of the senior men’s race, red and black vests were gradually uncovered. Dozens of them. A red and black army, a who’s who of Herne Hill past and present, from 79-year-old John Gebbels to 18-year-old John Tayleur, was amassing. Injured? Ill? Over the hill? There were no excuses. Not today. Retired? Not today. Everyone ran. As numbers swelled, it was a case of not who was there, but who was not?

Someone was missing, though. A gaping chasm at the heart of the birthday club: Stan Allen. For almost half of Herne Hill’s existence, an unfathomable 62 years, Stan was red and black. Stan died on New Year’s Day aged 79. More than an athlete and more than a coach, Stan was a beacon of humanity. His daughter, Sarah, had been among the finishers in the senior women’s race earlier. There could be no greater tribute to this remarkable clubman than towing the line, by simply running. Those who could not be in London were making their own tributes wearing red and black: Chris Peach in Derbyshire, Simon Phillips in Hong Kong and Paul Shiel in Indonesia. The massed field of senior men – 86 of them Harriers, taking the entire club representation over the day’s five races to a 125-smashing 164 – paused silently in universal admiration and respect for Stan. Cries of his trademark ‘elbows’ were shouted as we were sent on our way.

If there was ever a day when results did not matter, when it was the taking part that counted, when the individual was subservient to the whole, it was today. Actually winning the match against a previously dominant Kent AC had seemingly become an after-thought. An after-thought that became a reality. The course was ugly: 8.9km of liquid mud and hills. One-by-one Harriers rolled in, muddied and bloodied. Joe Morwood led the way in seventh, closely pursued by club men of the moment Alan Barnes and Chris Busaileh in 11th and 12th. Tim Elsey closed the scoring ten in 38th; Kent were defeated. The procession went on: Tim Ridley wearing Stan’s red and black vest; the great Dave Glassborow; father and son combinations Steve and Sam Knight, and Micky and Tony Harran; two-hour, 15-minute marathoner Benedict Whitby; the evergreen John Garber; Iain Lockett, who fronted Harriers’ domination of team cross country in the first decade of this century; an inspiring list of club stalwarts: Waldy Pauzers, Andy Lea-Gerrard, Keith Newton, Steve Bosley, Geoff Jerwood, Mike Boyle, Tom Conlon, Bob Harrison and Fernando Zelaya. Herne Hill Harriers had painted the mud of Wimbledon Common red and black.

Some one hour and 20 minutes after the start, John Gebbels, a man a year shy of 80 who was competing in Surrey League fixtures in the 1960s, closed the fixture and a chapter of Herne Hill Harriers’ history. It was a day to say: ‘I was there.’ How Stan Allen would have wanted to utter those three words. 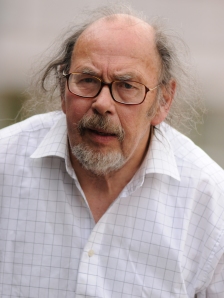