What is my biggest fear about running the Vanguard Way? Completing the full 66 miles? Eating and drinking enough to sustain myself for 10 hours? Conquering 1800 metres of thigh-shredding ascent and descent?

I can prepare for those eventualities. A far more unpredictable proposition awaits: the fauna of Sussex and Surrey. My first encounter with the beasts of the south-east occurred as I ran up the steep bank of Nore Hill above Woldingham. As I crested the grassy summit, a herd of cows appeared. Cows with horns. I spotted a bull among them, as well as a dozen or more calves. The group turned and stared morosely, then, without warning, ran – straight at me. Cows can run surprisingly fast. I backed away, then began to run too, before regaining my composure and attempting a half-hearted shoo gesture with my hands.

As I child I played a game called Grandmother’s Footsteps; one person has their back to several others standing some 20 or 30 metres away. The group has to progress forward without being spotted by the lone player, who will swirl around when they sense movement. The cows and I proceeded to play a version of this game. Let’s call it Runner’s Footsteps. When I moved, they moved. When I ran, they ran. When I ran quicker, they ran quicker. I felt my pulse rise. Ultra-running is all about mind games, but not mind games with cows.

After two or three minutes of these shenanigans, I bluffed the cows, sprinting one way, then deliberately doubling-back to throw them off my scent. As the gap between us grew, I scarpered out of that field.

Cows inhabit more than Nore Hill, it appears. I encountered them again at Alfriston, where a herd was blockading the exit to the field. To escape, I hurled myself over a barbed wire fence into a clump of stinging nettles. And there’s more still, apparently; this time near Haxted Mill. A fellow Vanguard Way runner reported: ‘If you like 100 cows following you thinking you are Farmer Giles you’ll be in for a treat. You can go round them, but they run like horses, if I can say that!’

Ah, horses – sensible, noble beasts. Now they wouldn’t behave like cows, would they? I’m now approaching Buxted, about a marathon into the south=-north Vanguard Way. As I cross a field containing two horses, one flings himself (or herself) friskily towards me and begins circling. All I can think about is Emily Davison.

As Dobbin leaves a gap between a fence and I, I charge towards it and hurdle the barrier, before collapsing into a bluebell wood. As I wander through trees to regain the Vanguard Way, I wave a cheery, victorious fist, hoping that I won’t cross paths with Dobbin or his bovine friends on June 16. 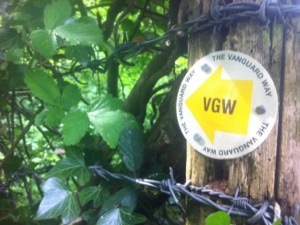