The Bob Graham round has dominated the outdoors news this week. First US ultra-runner Nick Clark ran through atrocious weather to Wasdale before calling it a day. Then two members of Cockermouth mountain rescue team got all the way round with minutes to spare. The challenge set by Rob and I seemed meagre in comparison: to recce leg 3, but, because of a lack of transport, a recce that would have to start and end at Dunmail Raise.

Rob picked me up from Penrith station. It was very dark. Rain was falling hard. Motoring west towards Keswick, the icy lip of Blencathra, silhouetted against the gradually lightening sky loomed above us. Miraculously (and wonderfully), the rain petered out by the time we pulled onto the verge at Dunmail Raise. Provisions packed, we began up Steel Fell, and proceeded to ‘run’, unsurprisingly given the gradient, our slowest mile of the year. It was mercilessly steep but straightforward; not so straightforward, I imagined, with leg 1 and 2 in my legs.

The ground to Calf Crag, then onto Sergeant Man and High Raise, our highest point of the day at 762 metres, was sodden. A huge amount of snow had clearly melted very recently. Streams were surging. The water slushing about our shoes was frigid. A lovely downhill but very cold run took us to Thunacar Knott, followed by two far more interesting summits, Harrison Stickle and Pike of Stickle. Martcrag Moor was the boggiest, wettest, most sodden ground of all. After veering off the path, we hastily had to retreat to more stable territory after sinking knee-deep into icy, muddy water.

We did an about-turn at Rossett Pike – or ‘pointless pike’, as we named it. What was Wainwright thinking when he came here? The hill was a non-entity, utterly dwarfed by the bulk of Bowfell to the south and west. I voiced a half-hearted suggestion to continue to Bowfell, then retrace our steps from there. Rob was having none of it. Bowfell looked a different proposition to what we had just accomplished. The snow lying on its slopes was thick and now having read Nick Clark’s account (‘The hillside was absolutely buried in nasty, wet snow’), it was a wise decision to leave Bowfell to another, better day. Hail chased us off Rossett Pike, with weariness beginning to take hold on the return journey to Pike of Stickle. We walked up, scoffing pork pies.

Repeating the Wainwrights we had recently crossed was a useful recce experience, but such a route lacked the morale boost that attaining new summits can give the runner. Pike of Stickle and Harrison Stickle seemed slippier, steeper, than on our first visit. From Thunacar Knott, we battled to Sergeant Man first, then blundered north-west to High Raise in another blast of horizontal hail. Steel Fell, from the west, was stripped of its drama, but the descent, on which I only fell once, was a fitting, albeit rather brutal, climax to a winter recce. Perhaps, more than anything, it was a pleasure to run across ground so recently crossed by Nick Clark and the Cockermouth duo, and to experience a snapshot of what these brave boys went through.

With that in mind, I’ll leave the last word to Nick Clark: ‘The Lakes may not have the altitude of some of the stuff we play on over in the Mountain West, but believe me they more than compensate in attitude. The British fells and the guys and gals who run on them are tough little buggers.’

I don’t mind being a tough little bugger. Not if it gets me round the BG. 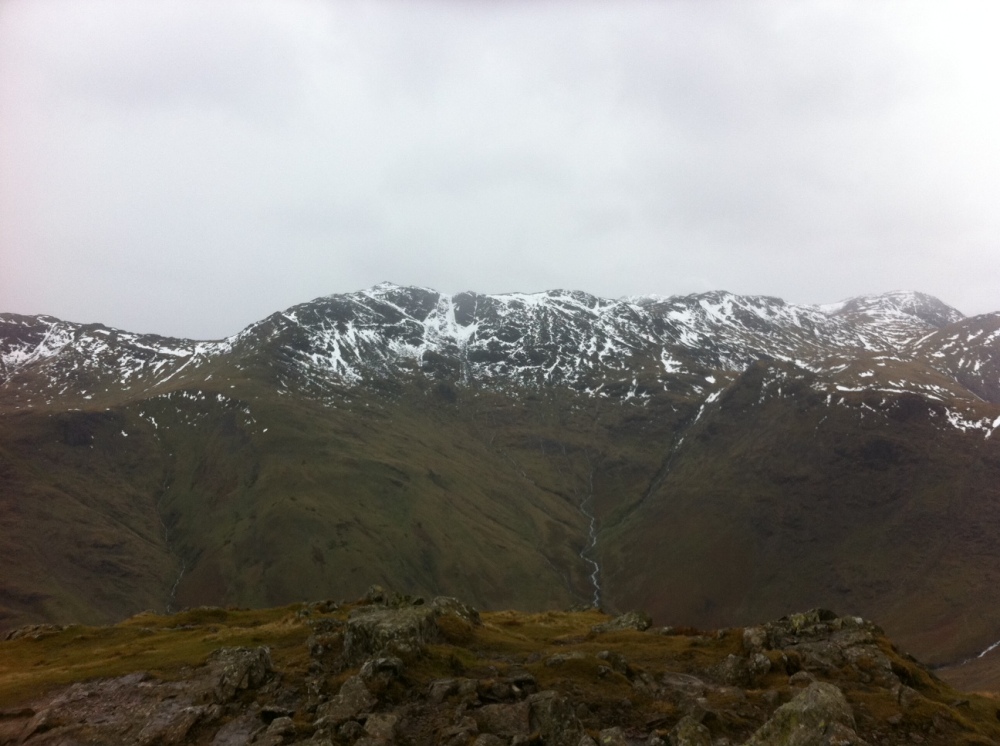 The forbidding, wintry face of Bowfell

A weary return to Steel Fell