The year is 1992. John Major is the Prime Minister, Wayne’s World is released, Microsoft is at 3.1 stage. Boff Whalley is a guitarist in the alternative band Chumbawumba – the group’s best known song, Tubthumping won’t be released for another five years – and a fell runner in the north of England. He is also the creative genius behind Fellternative, the satirical denouement of Up and Down magazine. 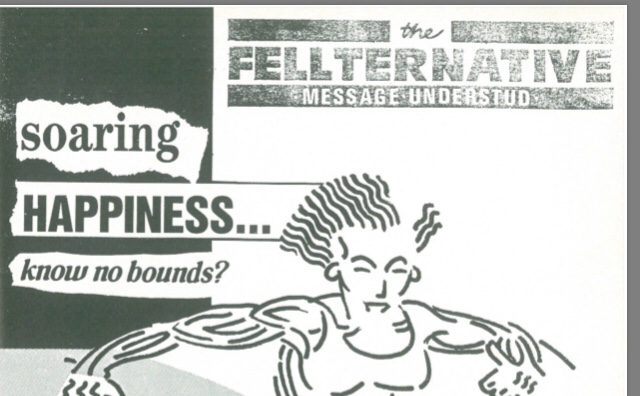 It was in Issue 11 of Up and Down, the last one that was ever published, that Boff wrote, On the hills there is only one legal currency: FREEDOM. (I have borrowed the title for this post.) The illustration (created by fell runner and mandolin player Geoff Read) that accompanied the writing was quite frankly brilliant. 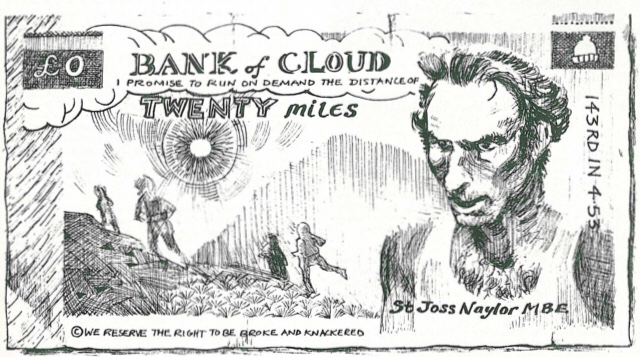 In the article, Boff issues a rallying cry: sport is being commercialised; fell and hill running must rail against it. I won’t attempt to paraphrase further. Here is the article in full.

This year in Barcelona, $630 will change hands to cover television rights to the spectacle of men women racing each other around a 400m track. The city of Barcelona win have coughed up over 700,000 million pesetas to stage the Games, the effect of which will be increased wealth, labour and improved services for some – and more poverty, unemployment and homelessness for others. Sport is big, big business.

Whatever the level of athletic achievement at such an event, the distasteful intrusion of so much money into sport can’t be ignored. Money – or rather, some people’s manipulation of it – has reduced almost every international sport to a hustler’s side-show. The red competition goes on not on the track or field of play, but in the stadium boardrooms…

Which, for us, begs the question: how come fell and hill running can so defiantly stand outside the money circus for so long? How come our sport is still free of the silly-money pay-outs which have changed the face of other sports everywhere? How come, even in its most fiercely-competitive moments, fell running still retains a dogged independence from the grubby sham of profit-before-pleasure? In a nutshell, how come someone can half kill themselves, tear skin, bruise muscle, risk life and limb leaping down loose rock and treacherous scree to win a race – and receive for all their sweat and effort a sports shop voucher for ten quid?

And where are the TV cameras? The sponsor’s executive boxes? (Can you picture Dave Woodhead entertaining the boss of the Soreen malt loaf factory with a banquet of drinks after the annual Haworth “Malt Loaf Run”?!). Why aren’t the spectators asked to pay to watch? Why isn’t my fell running vest emblazoned with “Holsten PIs” or “JVC” or “Candy”?

The simple answer is that we don’t need or want it: the whole point of fell is getting away from aIl that – just you, alone, up on the fells…

Fell running isn’t an ordinary sport, because its very nature – and the nature of the people who take part in it – is to protect it from the nicotine-stained hands of businessmen with pound-signs in their blood-shot eyes.

Because we’re not only protecting a sport, we’re also protecting the hills and mountains we run on. It’s no accident that fell running is a friendly, social sport – we obviously have a lot more to lose through the influx of too much corporate and media money than our amateur status.

Training grants? Altitude training expenses? All-seater stadia? Transfer fees? No thanks. Just give me the time, energy and health to get out on the hills. Freedom – it’s all free.

They are words that echo across the intervening 27 years – these in particular: ‘we don’t need or want it.’

Today, I think Boff is half-right. Some people do ‘want’ it – which is fine (usual caveats apply); but we definitely don’t ‘need’ it.

Take the most recent days in the British and Irish hill running world as a microcosm of the sport.

As I write, Nicky Spinks is somewhere on a Welsh hillside (presumably utterly exhausted) attempting to run a ‘double’ Paddy Buckley Round.

As I write, boats are skipping across Hebridean waters in the Scottish Islands Peaks Race, dispatching runners to trot up some of the finest mountains in the land on Jura, Mull and Arran.

On the subject of records, Gavin Byrne became the third person in a matter of a few weeks to better the time for the Wicklow Round.

Hundreds of runners have been at the races: Cadair Idris, Fairfield Horseshoe, Goatfell, Mount Famine, Old County Tops, and many more.

Then there is the Dragon’s Back…

And not forgetting those countless runners who just went out for a run, up to a summit where they might have paused for a moment, before continuing to the next.

There is inspiration everywhere you look. 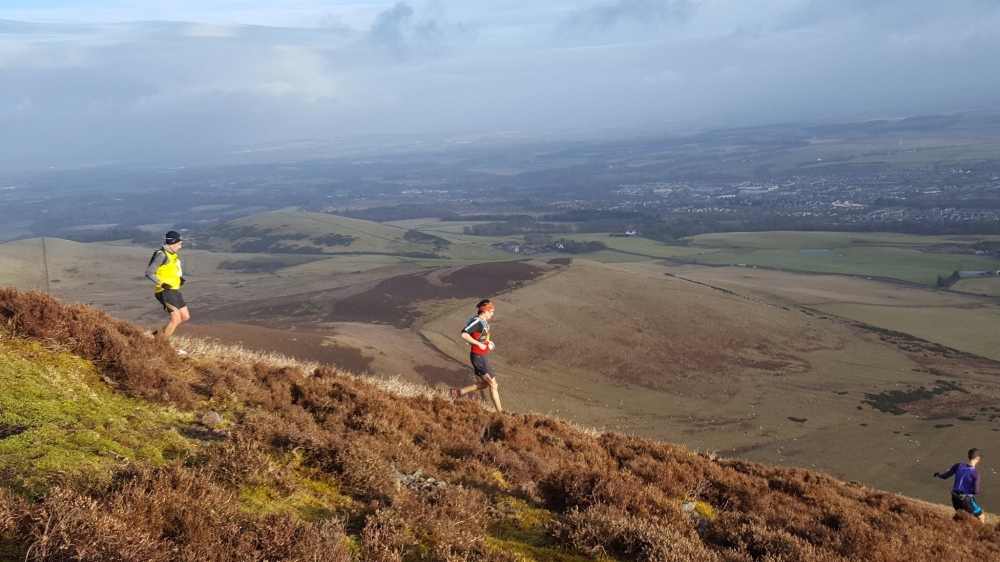 The tentacles of commercialism are everywhere too. They permeate every aspect of life, now and in 1992. We are hopelessly naive to think hill running can win such a battle.

What matters is what will always matter: the freedom that this sport gives us. Ultimately, that is what is driving forward Nicky Spinks, Finlay Wild and Gavin Byrne, the seasick runners over on the west, the first and last finishers of every race – and everyone in between, and those Dragon’s Back runners that will set out on a five-day journey tomorrow.

And ultimately it is that freedom that unites the people who are called to this sport.

Boff inspired this. He has the final words: ‘Just give me the time, energy and health to get out on the hills. Freedom – it’s all free.’